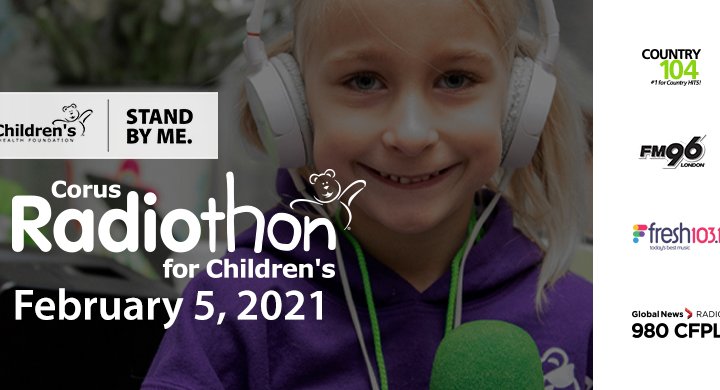 Through the power of radio and with the help of an endless supply of local generosity, the Corus Radiothon has returned to raise money for Children’s Hospital at London Health Sciences Centre (LHSC).

From 5:30 a.m. to 6 p.m. Friday, listeners will be treated to countless stories about the life-saving efforts at Children’s Hospital on Global News Radio 980 CFPL, FM96, Country 104 and 103.1 Fresh Radio.

The Radiothon is formed out of a partnership between Corus Radio London and the Children’s Health Foundation.

The event is also aided by more than a dozen sponsorships.

While the hospital is based in London, more than a third of those visits came from elsewhere including Windsor-Essex, Kitchener-Waterloo, Sarnia, Woodstock, St. Thomas and northwestern Ontario.

Through various Thames Valley Children’s Centre locations, the hospital is also able to extend its reach throughout southwestern Ontario, along with Owen Sound.

Throughout its history, the folks at Children’s Hospital have also helped saved countless lives, including that of Joey Crowley’s.

On Mar. 17, 2020, the 12-year-old from Mitchell went to Seaforth Hospital after he had been throwing up for several days. Joey was diagnosed with a stomach bug and sent home.

That evening, his mother Stephanie woke up to a noise and later found Joey laying unresponsive on his bedroom floor.

An ambulance brought him to Stratford Hospital before he was sent to Children’s Hospital’s paediatric critical care unit.

A surgery later revealed Joey’s appendix had burst a few days prior.

“A litre and a half of fluid was removed… from his abdomen, it was all poison, and poor Joey, all of his organs suffered a loss. We were very close to losing him,” Stephanie said.

“He was intubated and there were tubes everywhere. This was all (around) the time that COVID had started. It was really, very, very scary.”

Joey’s hospital stay would last for just over 40 days.

Pandemic restrictions meant the entire family couldn’t stay with him, so Stephanie would stay for four days at a time and then her husband Jim would come for two days at a time.

Things eventually got better as the family received what Stephanie described as a miracle.

“He’s back with us and he’s back 100 per cent. We’ll have go again next year for more tests for his heart and for his kidneys, but he seems to be just wonderful,” Stephanie said.

Speaking about the experience with Global News, Stephanie said it made her feel lucky to live in Canada given the healthcare that’s provided.

“He wouldn’t be here with us if it wasn’t for that hospital. They’re all angels. I’m sure that underneath all their PPE, they have their big angel wings,” Stephanie said.

“I told Joey I wouldn’t cry,” the mother added, smiling through tears as she recalled the experience with her son listening nearby.

There are a number of ways to donate during Friday’s Radiothon.

Those looking for a direct link to the online donation form can click here.

Other online donation methods, including merchandise for sale and a silent auction, can be found at childhealth.ca/radiothon.