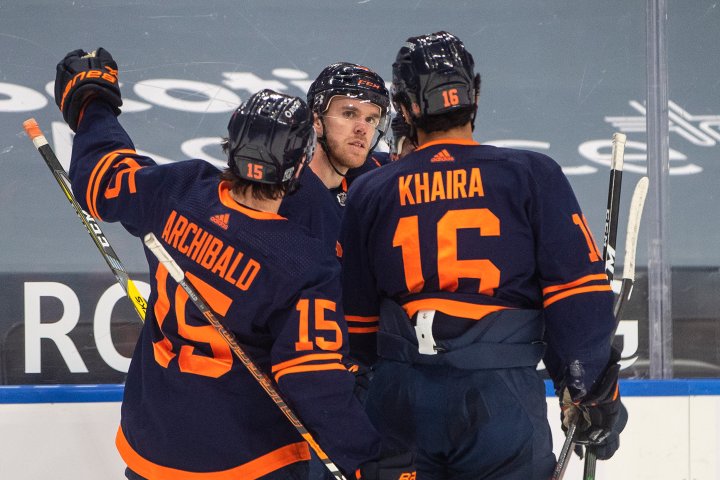 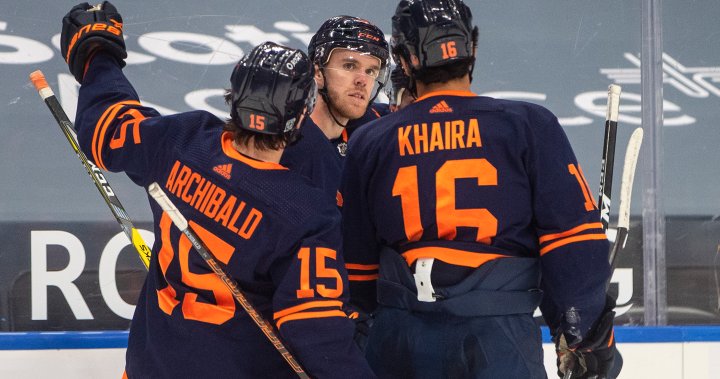 Connor McDavid exploded for a hat trick and two assists in the first 29 minutes of the game as the Edmonton Oilers routed the Calgary Flames 7-1 Saturday night at Rogers Place.

“We’ve found some results but there’s more growth in this. We’ve got to keep climbing the ladder here,” Oilers coach Dave Tippett said.

McDavid assisted on both goals. Andrew Mangiapane flipped in a puck on a Flames power play, but McDavid replied with a deflection on a man advantage late in the first.

McDavid scored on a no-look shot early in the second, then walked in front and snapped one by Jacob Markstrom to complete the natural hat trick.

“We had a good start and then we got ourselves into a little penalty trouble and they started to take the game over, but that’s the mark of a good power play though–to sense those moments and when you get a chance to change the game, you take advantage,” McDavid said.

Markstrom was pulled after allowing five goals on 15 shots. Nugent-Hopkins cashed in the Oilers third power play goal of the night to make it 6-1 after two.

Josh Archibald added to Edmonton’s advantage 36 seconds into the third.

McDavid has nine NHL hat tricks, eight in the regular season and one in the playoffs. Mikko Koskinen made 43 saves for his seventh win of the season.

“You almost forget sometimes how impressive he is and then he has a night like this and he’s on a different level,” Nugent-Hopkins said of McDavid. “Right from the start you could just see it in his eyes, see it in the way he was playing–he was just solid for us and solid defensively too. He pushed the pace for us and the rest of us followed along.”

“You have some nights where the puck just goes in for you and you don’t feel that good, and you have nights where you feel amazing and it just doesn’t go,” McDavid said.

Koekkoek didn’t return to the game after the Bennett hit.

“All five (defensemen) stepping up when Koeks goes down, that’s not easy to do,” McDavid said. Darnell Nurse led all skaters with 32:52 of ice time.

“Nursie is an unbelievable athlete,” Tippett said. “He was getting some work done on his legs and I said ‘just make sure there’s another 30 (minutes) in there tonight’ and obviously there was.”

The Oilers, 12-8, have won three straight and will play in Vancouver on Tuesday.

“That’s the beauty of this year. Every game matters and it’s a big test every night. We’re enjoying it,” Koskinen said.

With files from 630 CHED’s Brenden Escott

‘Not French enough’: What it means to be an immigrant in France