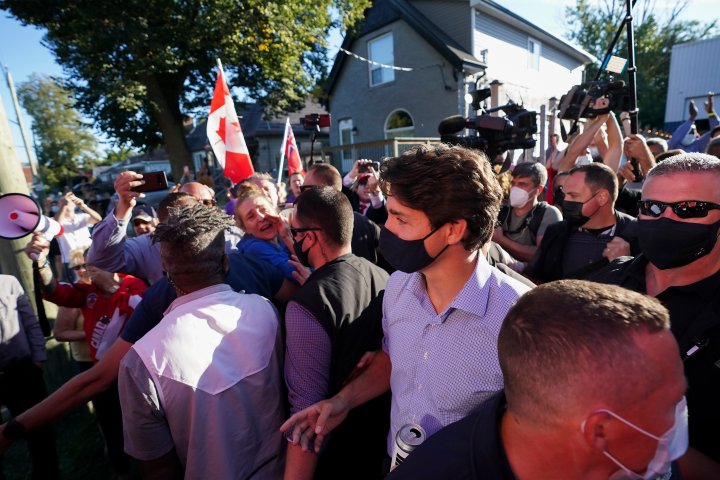 Liberal Leader Justin Trudeau says he “might have” been hit by gravel thrown by protesters at an election campaign stop in London, Ont., on Monday.

Trudeau was leaving the event when he was surrounded by angry protesters, some of whom appeared to be throwing handfuls of gravel and debris at the party leader.

RCMP security detail were forced to hold up their hands to try and protect Trudeau from getting hit as he got on his campaign bus. Some members of the media following the Liberal campaign were hit by the small projectiles, but were not hurt.

At London rally protesters threw gravel/small rocks at Trudeau. Couple of my press colleagues hit. Everyone ok. At this point not clear whether gravel made contact w/Trudeau. His team hasn’t confirmed. I was on other side. Didn’t see that, did see ppl spit on bus, crowd in front.

On the Liberal campaign plane later Monday evening, Trudeau told reporters that some of the gravel “might have hit my shoulder.”

When asked if he was certain he was hit by the rocks, Trudeau responded, “Does that matter?”

“There were little bits of gravel and I may have been hit,” he said, shrugging it off. “I had someone throw pumpkin seeds at me a few years ago.”

Global News has reached out to the Liberal Party and the RCMP for more information.

Many of the protesters in London appeared angry about COVID-19 health measures and vaccination requirements, and yelled slurs and insults at Trudeau.

Trudeau has been followed by angry crowds throughout the campaign, forcing the Liberals to cancel at least one event in Bolton, Ont., last month and to postpone others.

Read more: Trudeau says he ‘won’t back down’ from anti-vaxx protesters

Earlier Monday, Trudeau said he wouldn’t let “anti-vaxxer mobs” shape his policies, which include mandatory vaccinations for some workers and most domestic travellers.

“Yes, there is a small fringe element in this country that is angry, that doesn’t believe in science, that is lashing out with racist, misogynistic attacks,” Trudeau said.

“But Canadians, the vast majority of Canadians, are not represented by them, and I know will not allow those voices, those special interest groups, those protesters — I don’t even want to call them protesters, those anti-vaxxer mobs — to dictate how this country gets through this pandemic.”

He said the country needs leadership to recover from the pandemic, and painted his main rival in the election as ill-suited to do so because of his less stringent stance on mandatory vaccination for workers. He linked Conservative Leader Erin O’Toole’s positions to the “fringe” anti-vaccine crowd.

“They don’t get to dictate policy of this government, so it is puzzling to people to see that on vaccines and on so many other things, Erin O’Toole is at least taking some of his cues from them,” Trudeau said.

O’Toole has said he supports COVID-19 vaccination as safe and effective and pledged to try and get the national immunization rate above 90 per cent, but aims to offer rapid testing as an alternative to people who don’t get vaccinated.

O’Toole and NDP Leader Jagmeet Singh have denounced those who have threatened or hurled insults at Trudeau, calling for peaceful protests that still allow campaign events to go ahead with supporters and staff feeling safe.

–With files from Global’s Abigail Bimman and the Canadian Press