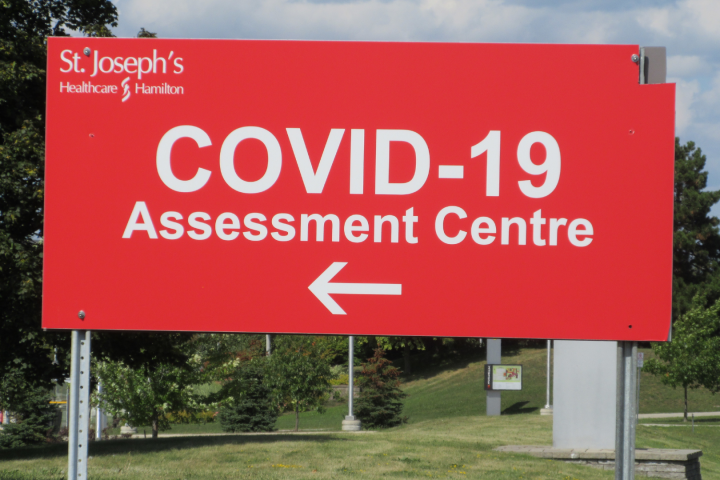 Hamilton public health says three weddings are tied to about a third of the city’s 97 total outbreak cases across the city as of Tuesday.

In all, the weddings accounted for 35 cases with 20 at the Waterfront Centre on Bay Street near the harbor, 11 at a LIUNA Station gathering and just four at Galileo gardens in Stoney Creek.

Medical officer of health Dr. Elizabeth Richardson says the weddings are representative of things health officials have been seeing since the province ‘s move into step 3 of its reopening plan in July as more people congregate at bars, restaurants and banquet settings.

“There are areas where people are taking off their masks to eat or drink, they may be dancing, they may be doing more socializing and then we do tend to see increased levels of transmission,” Richardson said.

The MOH says the settings are an example where the province’s indoor vaccine certificate program  – requiring residents to show proof of full vaccination as of Sept .22 – could help reduce infections coupled with other public health measures such as masks and physical distancing.

The outbreak at the Waterfront Centre wedding was declared over on Tuesday after a contact tracing investigation was completed. The surge began with just four cases when it was first declared on August 25 before moving to 8 cases on August 27 and 17 by Sept. 1.

The weddings at Galileo Gardens and LIUNA station were the largest of the five new reported outbreaks across the city on the weekend with three other surges in Stoney Creek at Seven Star Express Line Ltd. (2 staff cases), Cramaro Tarpaulin Systems (2 staff cases), and St. James the Apostle Catholic Elementary School (2 staff cases).

The outbreak at St. James the Apostle is the first of the new school year for the Hamilton Wentworth Catholic District School Board (HWCDSB) which has now reported five cases as of Sept. 4 including single cases at St. Gabriel elementary in Stoney Creek, Bishop Tonnos in Ancaster, and St. Thomas More on the Mountain.

The Hamilton Wentworth District School Board reported a pair of cases On Sept. 4 among staffers – one at Lake Avenue Elementary in the east end and Sherwood Secondary School in central Hamilton.

With the seven day average of new cases dropping to 61 per day over the weekend Richardson is hopeful the city has reached a plateau compared to a week ago when the daily average was 80 cases per day.

Hamiltonians aged between 18 and 39 continue to have the most infections with closed to 40 per cent of that demographic accounting for the city’s 447 active cases as of Monday.

Hospital admissions continued to rise over the weekend with a combined 10 patients checking into Hamilton Health Sciences (HHS) and St. Joe’s. The bulk of the admissions, 43, are staying in HHS facilities with 18 in ICUs. St. Joe’s has 16 patients with 10 in ICUs.

“The average number of new hospitalizations as well continues to be high,” Richardson said.

“There are just over four new hospital admissions each day due to COVID-19. Fortunately, though, the number of deaths is remaining low.”

Hamilton public health is number two among Ontario’s 34 health regions in percent positivity checking in at 7.11 per cent as of the weekend. That puts city behind only Windsor Essex which recorded a 10.1 per cent rate as of the same period.

The area of Hamilton with the highest positivity rate is the L8K postal code (between Queenston to Mount Albion and Brow to North Road) which at 12.9 per cent is 12th in the province with percent positivity.

Close to 2,100 shots were recorded in Hamilton over one day on Sept. 3 – a number not seen since early August.

However, the number did drop in half during the Labour Day long weekend to an average of just over 1,000 vaccinations a day between the Sept. 4 and Sept. 6.

The city averaged about 7,000 shots per week through August.

Three walk-in clinics over three days at Lime Ridge this past weekend appeared to do their job as over 500 people rolled up their sleeves thanks to a promotion giving a $5 CF SHOP! card for the first 500 receiving a dose.

The city will now turn the program to no less than 16 locations with low vaccination coverage rates with clinics in the first 20 days of the month and the Province’s GO-VAXX bus driving to a pair of locations in the latter half of September.

Four census areas in central Hamilton continue to be top 20 among Ontario regions reporting the highest number of tests coming back positive for COVID-19 from labs.

Public health will now target these areas in a street campaign that they hope will directly reach out to those who unable or do not have time to visit a clinic.

“So we’re doing place based clinics on site in apartment buildings, for example, to areas of disproportionate impact,” Richardson said.

“We’ve been reaching out to higher risk workplaces as well to offer onsite workplace clinics. So any workplace that is interested in that moving forward we’d be very happy to talk to you.”

As of Tuesday, Hamilton is lags behind the provincial average in COVID-19 vaccinations with just 73.3 per cent fully vaccinated and just over 80 per cent having had at least one dose.

The city ranks 30 out of 34 health regions in second dose coverage with only Lambton, Porcupine (Timmins area), Chatham-Kent and Haldimand-Norfolk faring worse for fully vaccinated residents.

Ontario’s average as of Tuesday was 77.5 per cent fully vaccinated and 84 per cent with a single shot.