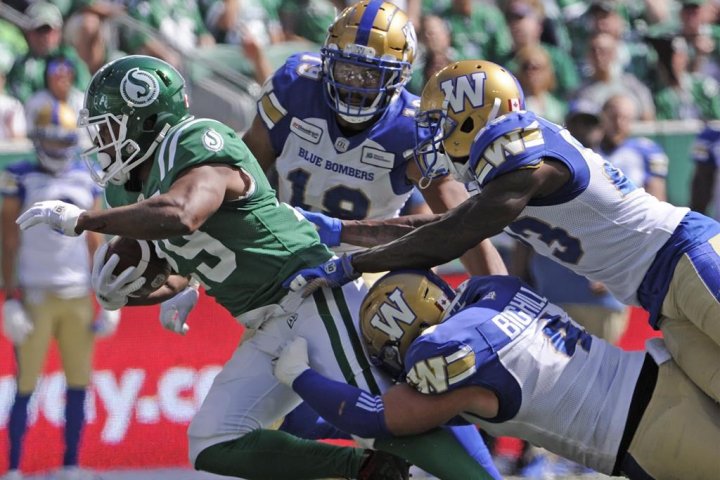 After opening the season within the friendly confines of Mosaic Stadium, running back William Powell and the Saskatchewan Roughriders are heading into a very hostile environment.

The Riders (3-1) visit Winnipeg (4-1) on Saturday afternoon to complete their Labour Day home-and-home series with the Banjo Bowl. And IG Field will certainly be rocking with the Bombers announcing the contest will be a sellout.

Winnipeg defeated Saskatchewan 23-8 on Sunday, handing the Riders their first loss of the season. And after starting the year with four home contests, the Riders will play seven of their remaining 10 regular-season games on the road.

“We’re just taking it game by game,” Powell said. “We’ve got the same opponent this week so it’s a big opportunity for us to maybe try to turn the tables.”

Winnipeg’s defence registered three sacks and three interceptions versus Saskatchewan. The Bombers’ offence also had the ball for over 34 minutes and accumulated 370 nets yards, 94 more than the Riders.

“We’ve got to raise our game up a level and execute.”

Powell said the Riders’ offence had opportunities against Winnipeg’s defence Sunday, but couldn’t take advantage. If opportunity knocks in the rematch, Saskatchewan must be ready to take advantage, Powell added.

“I wouldn’t say it’s just focus on the run game or (be) focused on the pass game. We just got to go out there and execute and when we have those opportunities come up we’ve got to hit them.”

At Toronto, Hamilton (2-2) chases a third straight win with Dane Evans under centre. Evans threw two TD strikes while Frankie Williams returned a punt for a touchdown and Simoni Lawrence scored on an interception return in the Ticats’ 32-19 home victory Monday. It’s the second of four meetings this season between the two teams. Nick Arbuckle makes a third consecutive start for the Argos (2-2), who return to BMO Field for the first time since beating Winnipeg 30-23 in their home opener Aug. 21.

At Vancouver, the Lions (2-2) are coming off the bye. Their last contest was 24-12 road win over Ottawa (1-4) on Aug. 28. The time off should benefit veteran starter Michael Reilly, who has battled an elbow ailment all season. Reilly threw for 301 yards and a touchdown in the victory at TD Place. The Redblacks dropped a 51-29 home loss to Montreal on Friday night and are ranked last overall in offensive points scored (14.8 per game) and offensive points allowed (26.0).

This report by The Canadian Press was first published Sept. 9, 2021.