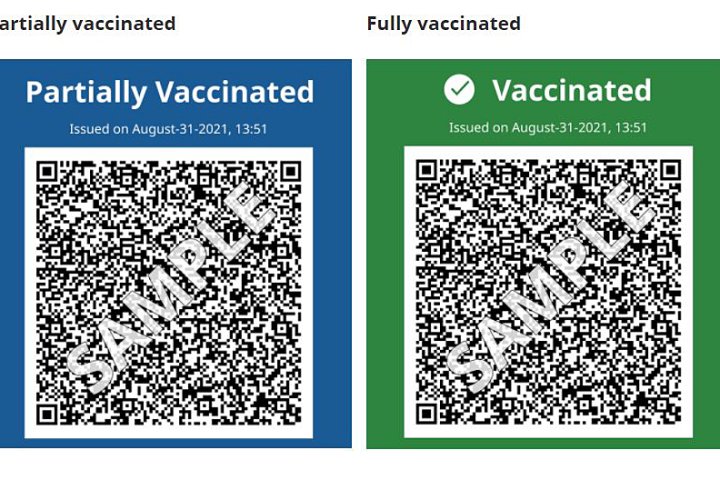 As B.C.’s vaccine card goes into effect Monday, some British Columbians are expressing frustration over an error in the system.

Wulfric Odinson, who goes by the pronouns he, him and his, told Global News he signed up for the card the first day he was able to.

“I found that my deadname, which I changed in 2016, had mysteriously reappeared on my vaccine passport,” he said.

A deadname is the use of someone’s birth or former name that is used without the person’s consent.

Kyler Emerson, a journalism student at Kwantlen Polytechnic University, who also goes by the pronouns he, him and his, told Global News the same thing that happened to Odinson happened to him.

He changed his name in early 2018 and said he hasn’t really seen that name since.

“Having that name pop up after going through the very lengthy process to get it changed and pay the fees, really government, I don’t know what happened there (but) it was hard and brought up a lot of old feelings.”

Emerson emailed the HealthLink contact but did not hear back, so he decided to call Thursday morning and speak to someone.

“She said she would send me a physical copy of my vaccine card,” he said. “I assume she put it in the mail yesterday, I didn’t get confirmation of that.”

A further email told him his deadname was pulled from the B.C. Immunization Registry and they are “looking into it.”

“I don’t know what that means,” he said.

Odinson said he is not necessarily surprised this is happening but it’s yet another battle to fight.

“This is something that’s been happening to me for about five years, so really what I felt was tired,” he said.

He has been back-and-forth with many different government agencies trying to get this issue fixed.

“There’s only so much you can take, as a trans person, there’s a lot of other concerns and considerations that come into our lives and so this was enough. I spent about 12 hours on the phone with MSP and Service BC and everybody else and learned a little bit more about what is actually happening with this and how this is happening and why.

“It’s now something the minister is going to have to address.”

Odinson said he has about 60 messages in his inbox from other transgender people facing the same issue.

He said it is very common for transgender people to have their deadnames come up on “official” documents such as voter registration cards, health documents and other legal papers.

He would like to see one portal where someone can change their name and then it changes it on all other official documents as well.

The Ministry of Health told Global News it continues to engage with advocacy and community groups and is working on a solution to this issue.

“The system does not listen to trans people when we point out that there are flaws that make our lives harder,” Odinson said.

Emerson said this whole process brought up a feeling of panic and fear about what was going to happen.

“It’s a bit of a slap in the face,” he said. “I am fully vaccinated, I did my part. I want to do things safely of course, but do things again and try to have a normal life.”

–With files from Kamil Karmali