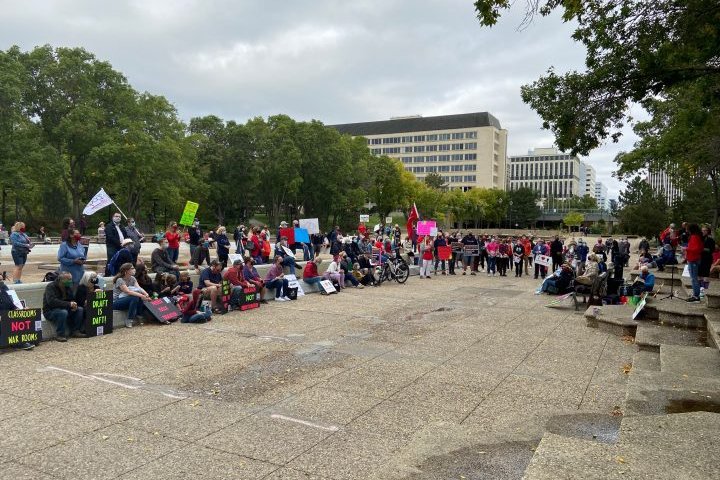 Hundreds gathered at the legislature Saturday, calling for the province to “ditch the draft.”

“We need to keep speaking out about it until it’s over because our government is not listening,” said Angela Grace, one of the event organizers and a steering committee member of the Alberta Curriculum Analysis website.

“The major issue from my perspective is this was taken away from teachers and put in the hands of politicians.”

Carla Peck is a social studies education professor at the University of Alberta. She has consulted on curriculum development across the country and internationally and says it’s all about having as many perspectives and experts as possible at the table.

“Which is the exact opposite approach this government has taken,” Peck said.

“The real danger for us here is if this curriculum, which experts across the board have said in every single subject area there are some serious problems, if this curriculum is ultimately enacted, we could be stuck with it for decades.”

For months, some of the major criticisms of the proposed curriculum included concerns over plagiarism, that it teaches a Eurocentric history and there’s a lack of accurate Indigenous perspectives.

“It’s so important we get this right, and the current draft is garbage. It doesn’t deserve to be in any school in Alberta,” said NDP education critic Sarah Hoffman.

“Alberta Education is committed to listening and working with parents, education partners and Albertans to make improvements on the draft curriculum. That’s why we are supporting and enhancing engagement opportunities.”

“Throughout the yearlong review process, public curriculum sessions are being held virtually every month and in-person sessions will begin later this fall.

“Feedback received from these engagements, as well as the public online survey, will be critical before we finalize content and will also inform development of future grades.”