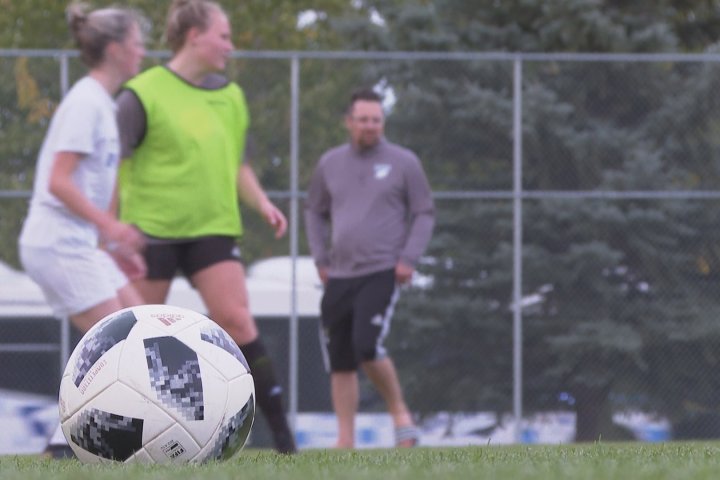 When the Lethbridge College Kodiaks wrapped up the Alberta Colleges Athletic Conference Soccer Championships way back in 2019, they could have never predicted that it would be nearly two years before they could build on their success.

For the men’s squad, that’s meant no opportunity to defend the program’s first ACAC title, and for the women, no chance to improve upon back-to-back bronze medal performances.

Read more: Demers bringing confidence from the octagon to Kodiaks net after unique road to soccer

As the teams prepare for the season to get underway on Friday, head coach Sean Carey says training has been focused on shaking off the rust and getting back to a winning mindset.

“We just reinstate our values that we bring as a coaching staff and just sell it to them again about what worked last time and what we should be looking at again,” Carey said.

“Just sell that desire to them again because you know they’ve missed football for 18 months now.”

But for Carey and his staff, they will be selling that mindset to a pair of rosters that look vastly different than those that had such success in 2019.

“It’s the foundation for the future of our program,” Carey said. “And you know, some of them are knocking on the door for starting roles.”

Charlie Block says he couldn’t be more excited to represent his hometown team. The local rookie says that adjusting to the new level has had its challenges after so much time away from the pitch due to COVID-19, and new players are getting well acquainted with athletic therapy staff at the college.

“It’s kind of weird. There’s a lot of injuries because we’re not in shape,” Block laughed. “We’re all getting hurt. Everyone is rolling out all the time.”

Carey says both teams have come a long way in the fitness department, as they edge closer to games beginning.

“It’s tough with the COVID year because it’s a lot easier to do fitness when you’re in person,” Carey said. “Trying to get motivated on your own to do certain things, I know I would struggle.

“There was lots of rust to shake off. We spent probably the first week, week and a half doing just ball work.”

On the women’s side, there are even more new faces making up the Kodiaks’ roster.

“We only have five returning girls, so we have 16 rookies this year,” Carey said with a laugh. “So that’s a challenge, and we challenge the girls. The rookies need to step up.”

Local rookie Krista van Diemen says the group has gelled well early, with plenty of big personalities and a desire to win.

“We have a lot of energy, a lot of laughing during practices, but we’re pretty serious when it comes to game day.”

That first game day is Friday in Red Deer, where the men and women will face the Kings and Queens, respectively.

The ACAC soccer schedule has been altered this year due to COVID-19; each ACAC south division squad will face each other’s school once for a total of six regular-season games instead of the usual twelve.

The Kodiaks will host their home openers on Sunday, Sept. 17, when they welcome the Olds College Broncos.