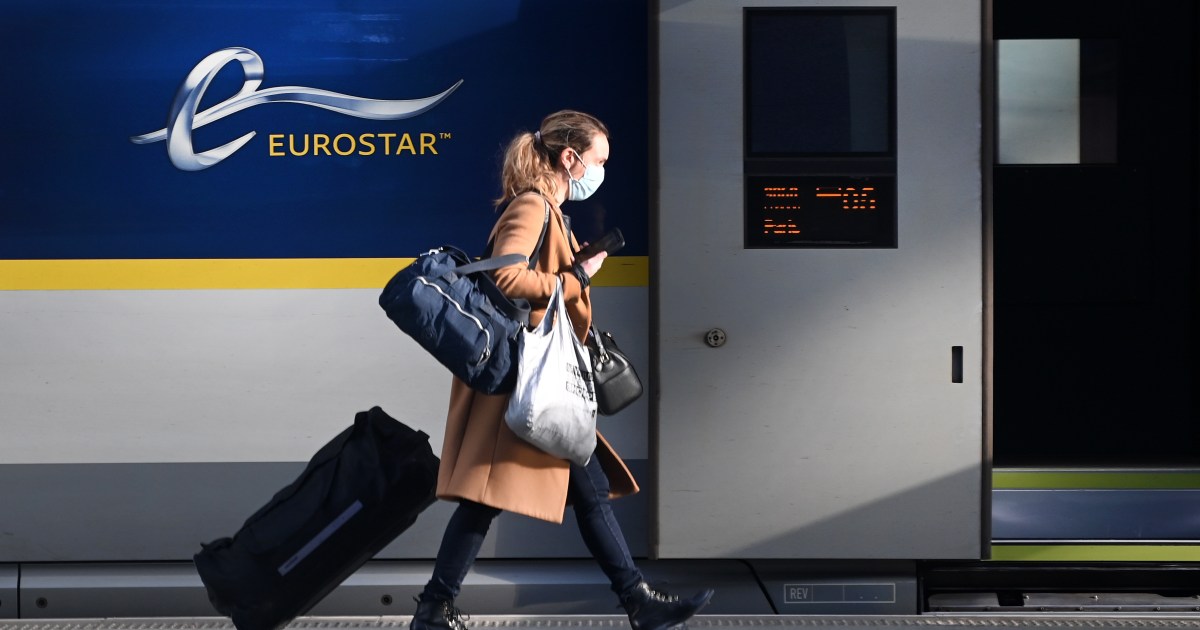 France has said it will tighten restrictions on travellers arriving from the United Kingdom, as infections linked to the Omicron coronavirus variant surge in Britain.

The latest figures showed new COVID-19 infections in the UK reached the highest daily level since the beginning of the pandemic, with more than 78,000 total cases reported on Wednesday.

The move comes after South Korea announced it was will reinstate stricter social distancing rules on January 2, six weeks after easing them, as the number of new infections and serious cases spirals.

Omicron has so far been found in at least 77 countries, according to the World Health Organization (WHO), with many reimposing travel restrictions to stem the spread.

Here are all the latest updates:

The medication has yet to be approved by the European Medical Agency, which in late November started reviewing US drugmaker Merck’s experimental COVID-19 antiviral pill for adults and said it could issue an opinion within weeks.

South Africa’s National Coronavirus Command Council (NCCC) retained its lockdown at “adjusted level one” the lowest of a five-tier system of restrictions, as the country battles the Omicron variant, health authorities said.

“The Council has directed the department to closely monitor the rising COVID-19 infections,” the health department said in a statement, adding that it would track hospital admissions, mortality and recovery rates.

These factors were all largely driven by the Omicron variant, which was contributing to a fourth wave of infections, it added.

French biotech firm Valneva said its COVID-19 vaccine candidate was efficient as a booster for people who had received the same shot as an initial vaccination.

“Initial results confirm that VLA2001 significantly boosted immunity in participants who received VLA2001 as a primary vaccination,” it said in a statement.

The news comes almost two weeks after a British study showed VLA2001 was the only shot out of seven that offered no immunity boost when given to people previously immunised with Pfizer’s COVID-19 vaccine.

Sweden will require visitors from other Nordic nations to have a vaccine pass to cross the border as it gradually tightens restrictions amid rising cases of the Omicron variant, the government said.

“We see an increase in infections in Europe, but also in our neighbours,” news agency TT quoted Prime Minister Magdalena Andersson as saying.

“For visitors from any country except the Nordics, we have a requirement for a COVID pass. Today, the government is going to take the decision that there will be the same requirement also for the Nordic countries.”

The new regulation will come into force on December 21, TT said.

France to restrict travel from UK amid Omicron surge

France is to tighten up restrictions on travel to and from Britain to slow the spread of the Omicron variant which is causing record numbers of cases on the other side of the Channel, the government said.

“We will put in place a system of controls drastically tighter than the one we have already,” government spokesman Gabriel Attal told BFM-TV, saying returning travellers would need a negative test taken less than 24 hours before travel, a quarantine enforced on return to France and limits on trips for tourism.

South Korea said it will reinstate stricter social distancing rules a month and a half after easing them under a “living with COVID-19” policy, as the number of new infections and serious cases spirals.

Curbs will return from Saturday to January 2, limiting gatherings to no more than four people – as long as they are fully vaccinated – and forcing restaurants, cafes and bars to close by 9pm and cinemas and internet cafes by 10pm, officials said.

Unvaccinated people can only dine out alone, or use takeout or delivery services.