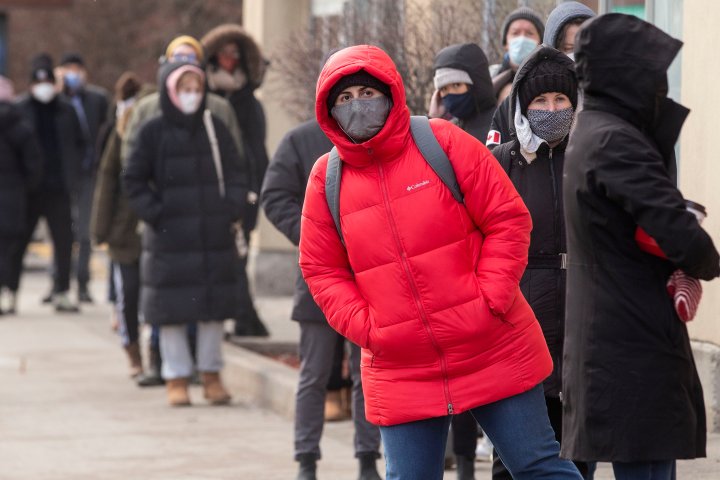 Immunity against COVID-19 among vaccinated adult Canadians and those who have already contracted the virus has been waning throughout the population, tests on donated blood have found.

Tests on around 9,000 donated blood samples from across Canada show that antibodies in the blood which fight the virus declined in October among all age groups, with experts saying the waning immunity is likely to have continued in November and December.

But the head of the government’s COVID-19 Immunity Task Force says that the highly contagious Omicron variant may offer an “immune dividend” offering fresh protection against future infection.

Scientists on the task force are now analyzing the extent of immunity offered by Omicron, as well as “memory of immune protection” in the cells which can kick in with future COVID-19 infections.

Read more: Omicron FAQ: Everything you need to know about the COVID-19 variant

With the task force studies of immunity levels informing government policy on booster shots, the findings are likely to influence when and how many booster shots people may have in future.

Dr. Tim Evans, executive director of the task force, which advises the government on its response to the pandemic, said in an interview that studying immunity due to Omicron is now a priority.

“There are large sections of the population that are now infected with Omicron and therefore this is one of the priorities for the task force, to understand what the immune dividend is from infection from Omicron,” he told The Canadian Press.

“If it is strong and sustained in terms of immune memory it may have an impact on how we think about the need and timing of boosters.”

Evans, added that Omicron is now so widespread that “our testing systems can’t keep pace.”

“So the number (with Omicron) is vastly underestimated. There are large sections of the population that are now infected with Omicron,” he said.

Canadian Blood Services is testing the presence of antibodies which fight COVID-19 in blood samples from donors over 17 years of age every month. It detected a big immunity boost last summer after Canadians got their second vaccine shot. But in September, it noticed that antibodies that could fight the virus were waning in people over the age of 70.

A Canadian Blood Services report completed this week, analyzing blood donated in October, shows that among all donors, from 17 year olds to pensioners, immunity had decreased.

Read more: Omicron and living with COVID: Why the new variant might change the timeline

Sheila O’Brien, associate director of epidemiology and surveillance at Canadian Blood Services said it was “uniquely positioned to provide information about the presence of COVID-19 antibodies in a large number of people across Canada relatively quickly.”

She said antibodies that could fight the virus were significantly higher in vaccinated than unvaccinated people.

“About 2 weeks after vaccination, antibody levels peak and then gradually decrease,” she added.

Evans predicted that waning immunity, measured in the blood, would continue to show up in November and December data. But he said the task force would study if there has been a boost in immunity with more and more people contracting Omicron.

The task force’s findings on waning immunity influenced the government to offer vaccine booster shots to vulnerable groups such as transplant patients with weaker immunity and older people.

Dr. Bruce Mazer, an immunologist and associate scientific director of the COVID-19 Immunity Task Force, said that even with waning levels of antibodies in the blood, the body’s immune system has a cellular memory of a virus and can mobilize to fight it. He said people who have been vaccinated, have had the virus, or both, generate cellular immunity.

“Other parts of the immune system are waiting and act as sentries,” he said. “You have T-cell memory which helps fight the virus and B-cell memory that helps to make fresh groups of antibodies.”

The McGill professor said the task force is currently studying this backup immune response, as well as the immune response to the Omicron variant which he said has 50 mutations, compared to the original COVID-19 virus.