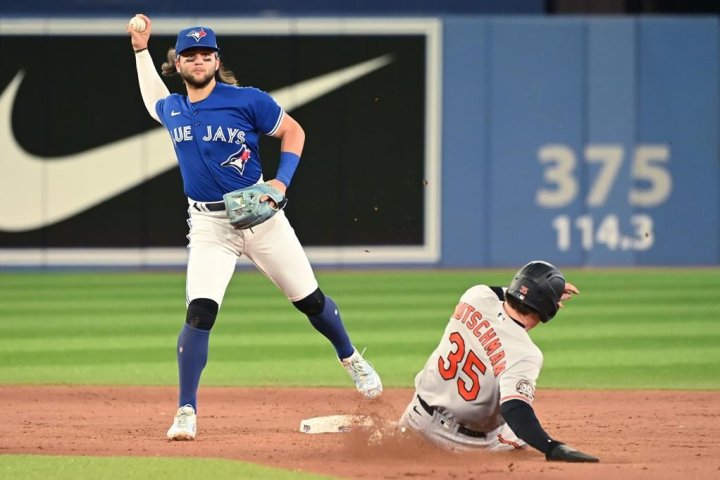 TORONTO – Not even the return of leadoff hitter George Springer could pull the Toronto Blue Jays out of their August funk.

Springer returned after a 10-day stint on the disabled list with a right elbow injury and reached base three times, but the Blue Jays suffered a series-opening 7-3 loss to the visiting Baltimore Orioles on Monday.

Toronto was riddled by some sloppy defence and poor pitching from starter Yusei Kikuchi (4-7) in the fourth inning that saw the visitors score three times.

“Not ideal games defensively back to back, which gets highlighted a little bit,” Blue Jays interim manager John Schneider said, referring to a messy defensive game in a loss to the Cleveland Indians on Sunday. “But overall, the defence has been great.

“You need to play good defence against anyone in the big leagues.”

The home side fell behind 3-0 but rallied for two runs in the third inning thanks to a two-run single from Lourdes Gurriel Jr. before 26,769 at Rogers Centre.

Kikuchi struck out Austin Hays to begin the fourth. But the next batter, Jorge Mateo, reached base on a Bo Bichette throwing error.

Mateo moved to second when Baltimore’s Terrin Vavra walked and advanced to third after Kikuchi’s throwing error on a pickoff attempt at second base.

A hard smash to Bichette knocked the Blue Jays’ shortstop off balance, and his throw home to get the speedy Mateo was late.

A Ryan McKenna double to the gap in left centre scored two more for a four-run Orioles lead.

“I felt like I was attacking the hitters early, but then I lost that rhythm,” Kikuchi said.

Kikuchi was good for only 3 1/3 innings, giving up six runs (three unearned) on four hits with three walks and three strikeouts.

An Anthony Santander RBI single in the first frame and a two-run second-deck blast from Ryan Mountcastle in the third inning gave the Orioles an early lead.

Baltimore scored another in the fifth on a sacrifice fly from Vavra. Vladimir Guerrero Jr., who saw his 22-game hit streak end on Sunday, countered with his team-leading 24th homer with one out in the fifth.

Springer will be the Blue Jays’ designated hitter for the time being until his sore elbow heals enough to allow him to play centre field. He went 2-for-4 with a double down the left-field line in the third inning, an infield hit in the seventh and a walk in the ninth.

With the return of Springer to his leadoff spot, Gurriel moved from first to third in the batting order.

The Blue Jays now are 15-11 since Schneider replaced Charlie Montoyo as manager.

Schneider confirmed the Blue Jays are close to signing Yoshi Tsutsugo to a minor-league deal. The outfielder/first baseman was released by the Pittsburgh Pirates last week.

Blue Jays ace Alek Manoah (12-5) will face righty Dean Kremer (4-4) in the second game of the three-game tilt against Baltimore on Tuesday. Manoah is 1-0 in two starts with a no-decision against the Orioles in 2022, and 2-0 in five career starts.

This report by The Canadian Press was first published Aug. 15, 2022.