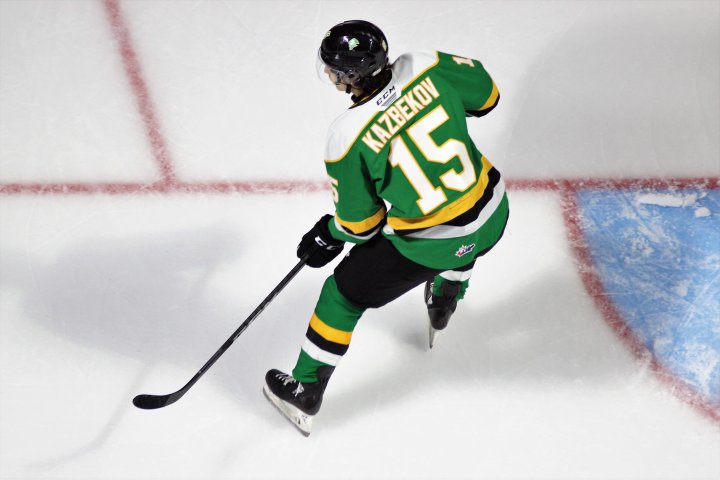 Homecoming weekend brings the feel of football and it brought a tale of two halves as the Erie Otters edged the London Knights 7-6 on Saturday afternoon in Clinton, Ont.

The Knights owned the first half as they surged to a 6-1 lead by the 6:16 mark of the second period only to have the Otters outscore London 5-0 in the second half of the game and force the teams into their second shootout in less than 24 hours.

That shootout went seven rounds before rookie Erie goaltender ended it with a save after a Lucas Signoretti goal.

London scored four times on the power play and once short-handed as the teams rekindled an annual pre-season rivalry after two years away due to the Covid-19 pandemic. Proceeds from the game went to support Huron Residential Hospice.

Ruslan Gazizov led the Knights with a goal and two assists. Rookies Sam Dickinson and Mike Levin each had a goal and an assist for London. Dickinson took the puck off a faceoff, walked to the top of the slot and picked the top corner on Gibbons in the second period. Levin buried a pass in front of the Otters net from Abakar Kazbekov who took a hit behind the net to take a play.

Ryan Del Monte and Oliver Bonk also scored on the man advantage for the Knights and Easton Cowan scored short-handed as he tried a pass on a two-on-one that hit an Erie defender and went between he legs of Gibbons.

Terrance managed to put the puck in the Knight net on one skate blade. He hit the post on an initial shot and in an attempt to corral the rebound, a skate blade released and he ended up falling to one side. From one leg and one knee Terrance found the puck and flung it in the net. Terrance then pushed himself on one knee to the Erie bench for congratulations from his teammates and a fix-up job on his skate.

17-year old Zach Bowen started the game for London and stopped 12 of 14 shots that he faced. Owen Willmore made eight saves on 12 shots after he entered the game at the halfway mark of the second period.

Gibbons allowed six goals on 22 shots for the Otters.

The Knights ended the pre-season with a 3-0-1 record and will now open the regular season on Friday, Sept. 30 against the Owen Sound Attack at 7 p.m. Budweiser Gardens.