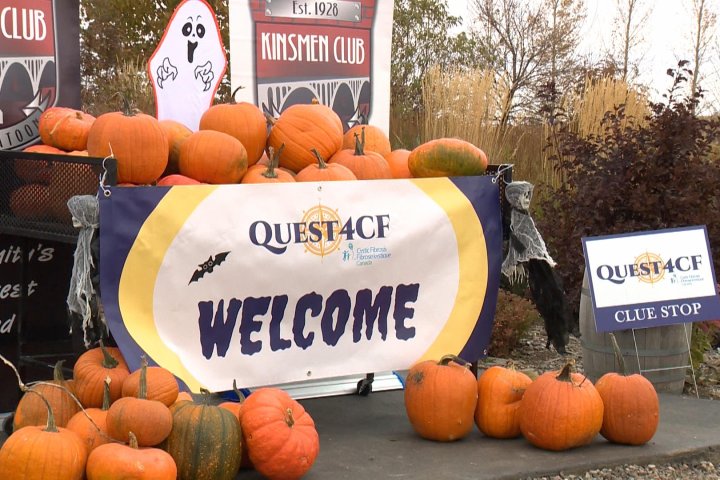 Halloween is just around the corner, and those in Saskatoon are getting in the spirit.

A Halloween-themed treasure hunt had people in the city out uncovering clues and searching up and down the streets for something big.

But what they were searching for wasn’t as important as why they were looking.

Cystic Fibrosis Canada hosted the event in support of those living with the disease.

“It’s a great way to kind of kick off the Halloween season,” Shaun Nechvatal said, whose two boys live with cystic fibrosis. “It’s a really important fundraiser that we really want to support.”

Nechvatal, who dressed up as Woody from Toy Story for the Halloween event, said the fundraiser is a good chance to raise awareness but also just have fun.

“When we first found out that Dominic (and Benjamin) were positive for cystic fibrosis and that he screened positive, it was really overwhelming,” he said. “It was a pretty steep learning curve.

“Just to see the community supporting an event like this is really encouraging.”

Read more: Economic woes are not deterring Canadians from spending more on Halloween this year

The Halloween-themed treasure hunt spanned across Saskatoon after starting at the Black Fox Farm and Distillery.

The event initially began in 2020 as a way to give families an activity during the pandemic.

“This seemed like the perfect opportunity for us to be able to go out and stay in your family bubbles and be able to get out and support a good cause but actually get out of the house and have some fun as a family,” said Janice Daniels, one of the organizers with Cystic Fibrosis Canada.

Cystic Fibrosis Canada said it is the most common fatal genetic disease, affecting more than 4,300 Canadian children and young adults.

Theirs is no known cure, but Daniels said fundraisers like this can help find treatments and work towards a better future.

“Just in the last year, we had a miracle life-changing drug that through research and funds is now available to those living with cystic fibrosis,” Daniels explained.