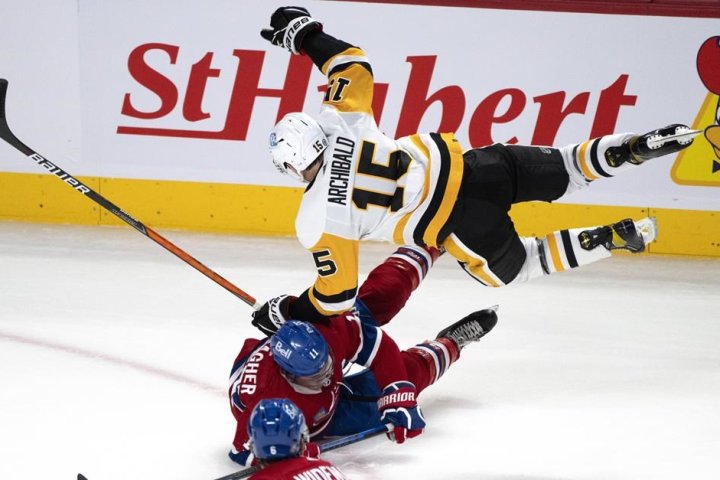 It’s been a tale of two Montreal Canadiens in the short sample size that is this season so far.

The Canadiens at home were entertaining and enjoyable in their win against the Toronto Maple Leafs. However, on the road, their two contests were a struggle.

In both Detroit and Washington, the Canadiens had difficulty generating any offence at all in two losses. Of course, their job is not to entertain the other team’s fans when they play road games, but they will need to prove they can generate a competitive game away from the Bell Centre.

The theory that they could make for an enjoyable night of hockey at home got a test in Montreal on Monday night with the Pittsburgh Penguins in town. The Habs were the better team for most of the night, and justice was finally served with a comeback 3-2 win.

The lines were changed by head coach Martin St. Louis for this contest, and the changes worked in a significant way. Just about all of the forwards seemed rejuvenated by the new trios.

The top line lost Josh Anderson and found Sean Monahan. He seemed to have a pace that suited Nick Suzuki and Cole Caufield a lot better. Also, Monahan has a strong awareness as a defensive forward. That’s something that helps Suzuki and Caufield who can show a lack of structure in their own zone still at times. They need a third forward who is responsible. Monahan also had a good read on where Caufield and Suzuki would go on the attack.

Caufield can create on his own though without any help. In the first period, he accelerated right through one of the best in the game, Kris Letang, to get a quality scoring chance. It was gorgeous. Suzuki finally got the Canadiens on the board with an outstanding rush into the attacking zone and shot.

The Canadiens tied it with two minutes left on a Caufield tally where he somehow managed to be left completely alone after a magnificent pass from Jonathan Drouin.

Also improving significantly because of the new lines was Mike Hoffman who didn’t seem to even get a single good look in the first three games. In this one, he was with Juraj Slafkovsky and Jake Evans. All three elevated their games playing with each other. In one shift of the first period, they had at least 30 seconds of solid pressure hemming the Penguins in their own zone.

Another player completely lost in the first three games was Evgenii Dadonov. In this contest, the spotlight was put with Christian Dvorak and Brendan Gallagher. This brought out the best games of the season for Dadonov and Dvorak. The hard work of Gallagher seemed to rub off on the other two. He often won pucks that they then seized on for chances.

The final of the trios was Kirby Dach with Josh Anderson and Drouin. Dach, once again, with his fluid stride looked solid. However, they would be the only one of the four lines that didn’t have immediate chemistry elevating their games playing together.

Drouin had a strong moment on the tying goal. Dach scored the winner on a superb pass from Monahan. Two of the three with some magic, but they didn’t yet find it with each other. It could come. Confidence certainly is high for two of the three members after the win.

Hopefully, these four lines can stick together for a little while to see if they can build on this. They created well. Good strides were made offensively after a lacklustre weekend. The Corsi analytics agreed with Montreal having a large advantage in the contest.

On defence, the youngsters are more impressive night after night than the veterans. One only needs to look at ice times to understand who the coaching staff favours. The guess would be that the rookies would be eased into tough assignments. Instead, playing the most were Jordan Harris and Kaiden Guhle in the first period.

The kids are alright. The defence of the future is going to learn those little nuances that mean the difference between wins and losses. They’re lacking only a little awareness at times.

None of the four rookies struggle for strength or speed. Arber Xhekaj will be feared physically when he learns exactly when to lay out the body. Jonathan Kovacevic could be a steal if he keeps his progression up.

In fact, fans should feel quite impressed that Jeff Gorton and Kent Hughes seem to have a real eye for talent. There was a large pool of choices on the waiver wire as final rosters were declared. Their choice wasn’t one on anyone’s radar, but they found someone with good potential.

The Canadiens didn’t look weak. They played a solid game. The fans appreciated their efforts. Even at 2-0 in arrears, they received a loud ovation for a strong shift. The patience should be there from fans, and it is there.

The club only needs seasoning. There’s just so much youth that it all must seem overwhelming. There’s a reason you don’t bring four rookies on to your blue line, and new players all over the place on every line up front.

You can’t expect cohesion immediately, nor chemistry, nor results.

However, if they keep playing like this, not one of these young players will regress. They will all find a higher level with more games, and more of an understanding of each other. The hard truth is the poorest players on the team are Bergevin contracts of veteran players. Those contracts need to end.

Again, the key word is patience. The seeds are being planted. The harvest will be bountiful.

It has been a long tradition in the history of sports to boo players on the other team. There are occasions when it does not seem quite right, like when Saku Koivu returned to Montreal playing with the Anaheim Ducks. Koivu was a legend in Montreal, battling cancer and returning to the lineup. Emotions ran deep with him. Thankfully, there was only a smattering of negativity directed his way.

There are other times that booing didn’t make a lot of sense. Mark Streit comes to mind in this category as a player who took a giant contract offer from the New York Islanders. It wasn’t as if Streit was choosing a couple extra dollars in New York. He wasn’t offered a contract at all to stay in Montreal.  So when he was booed that first night back, it did seem quite illogical.  He stated his preference for Montreal, but management stated a preference for someone else.

On Monday night, Jeff Petry was booed despite putting in his best seasons in Montreal and helping the Canadiens to the Stanley Cup finals only two years ago. In this instance, though, Petry actually asked for a trade from Quebec thanks to his wife seemingly uncomfortable with the language and Canada’s more stringent COVID-19 policies. She wished to return her family to the United States. She got her wish.

Anyone would take this as a personal slight. People are proud of where they call home. When someone doesn’t want to be where they have taken up roots, it’s insulting. Nations have gone to wars over slights like this.

Thankfully, in this case, it was just booing. It wasn’t even that much actually. It is a free environment at the Bell Centre to state your emotions and opinions. The fans were well within their rights to boo.

After the video montage on the scoreboard of Petry’s best moments in Montreal, there were only cheers. Natural then that when Petry was trying to score on the local heroes, it turned back to boos. This is the nature of sports. It will never change.

The crest is bigger than the name on the back of the sweater in Montreal. It’s okay if some support the crest above all else. It’s normal.

Brian Wilde, a Montreal-based sports writer, brings you Call of the Wilde on globalnews.ca after each Canadiens game

1:13 Habs GM looks at the season ahead