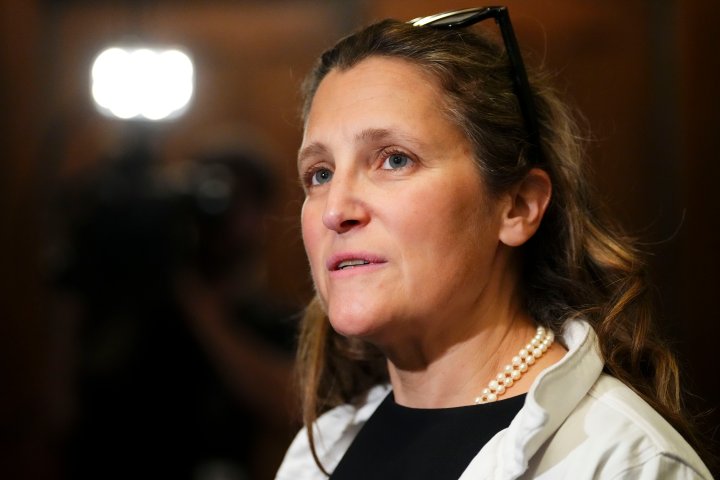 “I think it was deeply hurtful to Ukrainian Canadians here in Alberta,” she said Thursday in Edmonton, noting her own Ukrainian-Canadian family living in the province were also hurt by the remarks made by Smith.

Earlier this year during a livestreamed question-and-answer session on a social media site, Smith suggested the only way for the war to end was if Ukraine remained “neutral.”

“I think the only answer for Ukraine is neutrality,” she said in April, before winning the UCP leadership contest.

“There are thriving nations that have managed with neutrality.”

In a statement Tuesday, Smith apologized for the “ill-informed” comments — the day after she tried to downplay statements from her past.

“My knowledge and opinion of this matter have drastically evolved since that time, and I apologize for those previous comments,” the premier said.

Today, I am reaffirming my condemnation of the Russian invasion of Ukraine and offering my full apology for past comments. pic.twitter.com/bCpwiRV5Dz

According to the 2016 census, Alberta was home to more than 27 per cent of Canada’s 1.36 million Ukrainian-Canadians, behind only Ontario.

“I know that Albertans, maybe especially people in northern Alberta, have a profound understanding of what’s happening in Ukraine,” Freeland said.

“As Albertans, as Canadians, it’s really important to stand up for Ukraine.”

Freeland was in Edmonton visiting a labour union and spoke Thursday to provide an update on Canada’s economy, warning of a “difficult time ahead.”

“Our economy will slow. There will be people whose mortgage payments will rise. Our unemployment rate will no longer be at its record low,” she said.

1:52 Danielle Smith apologizes for comments on Russia-Ukraine war but some not satisfied

Despite Russia’s invasion of Ukraine contributing to the rising cost of living across the globe, according to Freeland, it’s also accelerating the world’s green transition, she said.

“Europeans are absolutely committed to speeding up the green transition,” said Freeland.

“I think we can all understand why the rest of the world is looking at Europe and is saying, ‘let’s move as fast as we can to end our dependence on the petro tyrants.’”

Russia invaded Ukraine nearly eight months ago and over the last two weeks, Russia has barraged Ukraine’s critical infrastructure with attacks using missiles, self-destructing explosive drones and other weaponry as Russian forces are being forced back on the ground.

On Wednesday, missile strikes and shelling of energy utilities left more Ukrainian villages, towns and parts of two cities without power, according to authorities, tightening an energy squeeze that threatens misery for millions in the winter.

–with files from Global News’ Adam Toy & The Associated Press