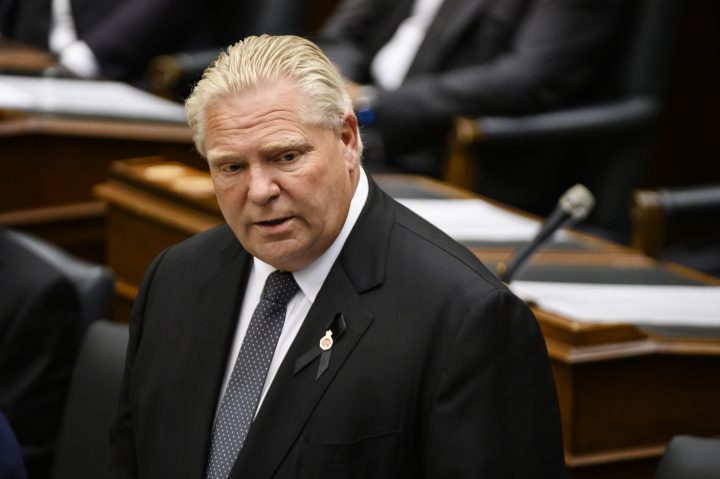 Ontario Premier Doug Ford is attempting to use parliamentary privilege as a shield to prevent him from testifying in the Emergencies Act inquiry, according to new documents filed with a federal court on Tuesday.

The filings, shared by the Premier’s Office with Global News, suggest that Ford, as well as former solicitor general Sylvia Jones, hope to have their appeal heard by Nov. 1.

If a judge sides with the Ford government, the Premier may be able to duck the hot seat and avoid testifying at the Emergencies Act Inquiry.

Neither Ford nor Jones appeared in the legislature during Question Period on Tuesday.

The inquiry is investigating whether the use of the sweeping legislation to end the occupation of downtown Ottawa by the so-called “Freedom Convoy” was justified.

The commission officially issued a summons on Monday, after multiple attempts to convince Ford to participate voluntarily were rejected by the provincial government.

Lawyers for the province argue the summons issued to Ford and Jones breaches parliamentary privilege “by attempting to compel testimony from sitting members of the Ontario Legislative Assembly while the Legislature is in session.”

It says the summons “must be quashed.”

The application also argued that “irreparable harm will occur if a stay is not granted.”

“The constitutional privilege, which the Supreme Court has confirmed is of central importance to the Canadian legal system as a whole, will be breached and the application will become moot,” it said.

Read more: Parliamentary privilege? How Ford is refusing to testify on Emergencies Act

The concept of parliamentary privilege was first claimed when the House of Commons in the United Kingdom was trying to establish a distinct role for itself.

In practice, it gives politicians immunity in a few different contexts.

It grants them freedom of speech, freedom from arrest in civil actions, and exemption from jury duty. Parliamentary privilege also grants legislators exemption from being subpoenaed to attend court as a witness.

The filing indicated — barring a successful court challenge — Ford is scheduled to testify at the commission on Nov. 10 at 9:30 a.m.

— with files from Global News’ Rachel Gilmore and The Canadian Press