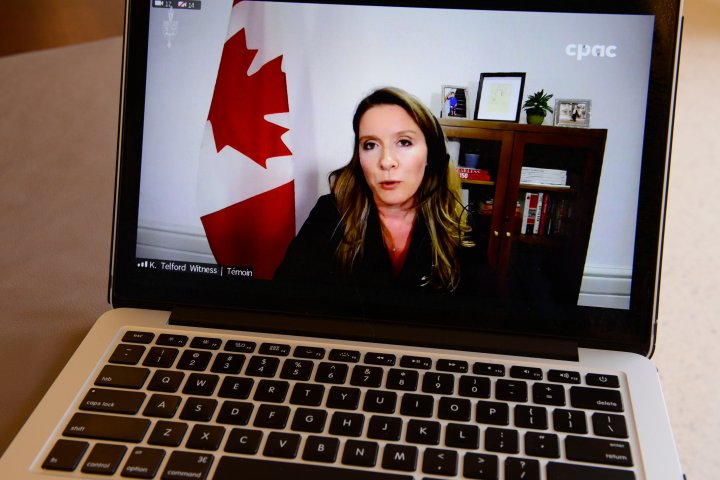 The House of Commons defence committee meeting probing military sexual misconduct has been cancelled Monday just before it was expected to resume debate on whether to call Katie Telford to testify.

A notice on the committee website listed that the meeting had been scheduled to begin at 11 a.m. Eastern on Monday in-camera, which means behind closed doors.

However, just before the scheduled start time, the notice was updated to say the meeting was cancelled.

No date has been set for its return and no reason was given for the cancellation.

Global News reached out to the office of Liberal MP Karen McCrimmon, who is chair of the committee, asking why the meeting was cancelled. No response has yet been received.

Conservative defence critic James Bezan said the move is an attempt to avoid debate on the motion proposing to call Telford to testify.

“After shutting down committee with a filibuster on Friday to avoid a motion calling the Prime Minister’s Chief of Staff Katie Telford to Defence Committee, the Liberals have outright cancelled the meeting today,” he said in a statement.

“The Liberals have shown how far they will go to continue this cover-up and stop Canadians from learning the truth. It’s clear that the Liberals are more interested in protecting Katie Telford than the women and men in the Canadian Armed Forces.”

The committee heard on April 23 from former Prime Minister’s Office staffer Elder Marques that Telford, who is Prime Minister Justin Trudeau’s chief of staff, knew about an allegation against Gen. Jonathan Vance in 2018, and that Marques kept her updated on brief efforts by bureaucrats to probe it.

During those brief efforts, bureaucrats were informed that the allegation was related to what they described as “sexual harassment,” but Trudeau has recently claimed that “no one knew it was a Me Too complaint.”

Documents reported on by Global News, though, have raised questions about what Trudeau knew.

Trudeau had first said he was not “personally aware” of the 2018 allegation against Vance.

READ MORE: Sajjan refuses to say whether he knew 2018 Vance complaint was sexual in nature

Defence Minister Harjit Sajjan, with whom the allegation was originally shared by the then-military ombudsman in 2018, refused five times during a recent interview with The West Block‘s Mercedes Stephenson to answer when asked whether he knew the allegation was sexual in nature.

He said only that he didn’t have “much detail” on the allegation.

Gary Walbourne, who was military ombudsman at the time, has testified that Sajjan was aware of the nature of the complaint, but refused to look at evidence Walbourne says he brought with him.

The cancellation of the defence committee meeting comes after Conservative Leader Erin O’Toole on Monday morning called for Trudeau to fire Telford.