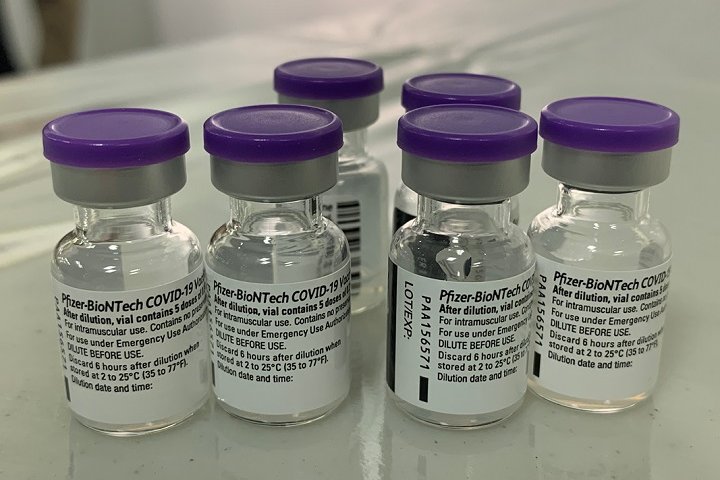 Saskatchewan health officials are predicting “blockbuster” supplies of the COVID-19 vaccine in the coming months.

Dr. Saqib Shahab, the province’s chief medical health officer, made the comment Tuesday during a briefing on Saskatchewan’s roadmap to reopening.

“May and June are going to be blockbuster months of vaccine supplies,” Shahab said.

“We are so fortunate in Saskatchewan and Canada to have safe and effective vaccines abundantly available.”

According to Health Canada, Saskatchewan is forecast to receive 627,120 doses of the Pfizer vaccine between May 3 and July 4 — 63,180 weekly during May and 74,880 weekly starting in June.

The province is also forecast to receive 31,300 doses of the Moderna vaccine during the week of May 10.

No forecast for distribution of the AstraZeneca to the province was provided by Health Canada for May or June.

As of May 4, 460,747 doses have been administered in Saskatchewan, with 65 per cent of people aged 40 and older reported to have received their first dose.

Premier Scott Moe said receiving those allotments of vaccines is one of the variables necessary to move forward with the reopening plan.

Under the first step of the plan, some of the current public health measures such as the size of private gatherings will be eased once three weeks have passed after 70 per cent of the population aged 40 and older have received their first dose of the vaccine.

“For weeks now, we’ve been saying that the road back to normal runs through one of our vaccination clinics,” Moe said during the briefing.

“I have every faith that between our drive-through clinics, our appointment-based system that we have, as well as our pharmaceutical capacity that we have, we’ll be able to deliver those vaccines in short order.”

The other variables, Moe said, are following public health measures and vaccine hesitancy.

“If people for some reason, and I don’t expect this, but for some reason quit following the public health measures, that would threaten the opportunities that we have in this (reopening) plan,” Moe said.

“The second variable that we have is that people for some reason that I wouldn’t understand, choose to not go and get vaccinated and we actually don’t achieve the metrics that we had put forward in this plan. That would be a risk to not moving forward.”

“We are entering a very exceptional phase of completion of first doses for everyone 18 and older, and then completion of second doses in a much more compressed timeframe compared to the timeframe for completing the first doses,” he said.

That could come as early as the end of May.

Just the Pfizer doses will be enough to get the province to the “finish line” in administering first doses and move on to second doses, according to Saskatchewan Health Authority CEO Scott Livingstone.

“What we need now is a stable supply of vaccines and it looks like we’re getting that now in May and June and beyond,” he said.

“I think we have a lot of confidence in the program with its ability to deliver based on what we’re going to need it to do.”