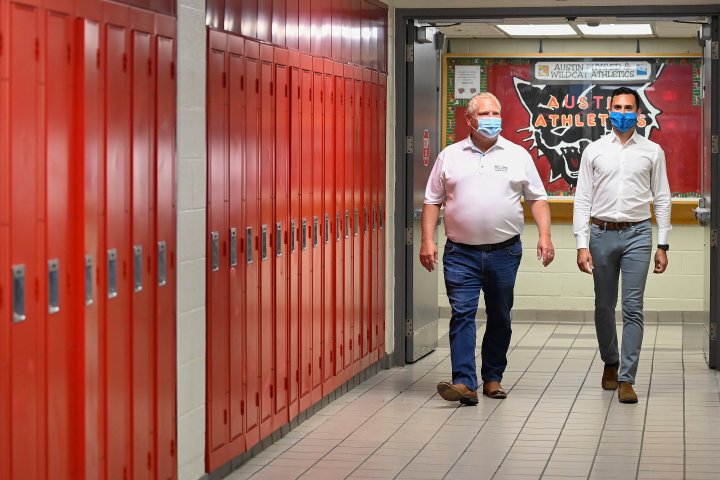 Disappointed, but not surprised.

That’s the reaction from some parents in the London area after Ontario Premier Doug Ford announced that students in the province would continue remote learning for the rest of the school year.

The decision comes a week after Ontario’s chief medical officer suggested the opposite, sparking optimism from some local parents and guardians about a potential return to school.

Read more: Ontario schools to remain closed to in-person learning until the fall

“Throughout all of this, there’s been a lack of support for working parents,” said Ariel Taylor, whose six-year-old daughter is enrolled in senior kindergarten with the Thames Valley District School Board (TVDSB).

“If the kids were to go back, that would mean that I would save almost $1,000 in child care, which would’ve been really really nice, but I guess that’s not going to be an option.”

The need to be at home to support her daughter’s remote learning has forced the mother to put her career on hold. As a fertility therapist, Taylor requires a private space to ensure client confidentiality, something that’s been hard to find while taking care of her daughter.

The mother added that it’s clear her daughter misses being around people.

“She doesn’t do well with the online classes and being able to sit still and just look at a screen for hours a day,” Taylor said.

“My daughter’s school hasn’t had a single COVID case the entire school year… I know that’s not the case for every single school, but it’s kind of disappointing that she can’t finish out the year with her friends, no kindergarten graduation, no milestones, nothing like that.”

The news was also upsetting for Pam Holloway, a grandmother of eight who has grandchildren attending both TVDSB and the London District Catholic School Board (LDCSB).

“They’re absolutely bored (and) they don’t listen as much because they don’t get to breakaway from their parents.”

“My husband’s retired, I’m semi-retired, this should be our time to do what we want rather than be settled down doing school work on a daily basis and not knowing what the school work is compared to what we learned,” Holloway added.

“We’re back to being full-time parents for the most part.”

Laura Gonzalez is the president of the Thames Valley Council of Home and School Associations, an independent group that acts as a liaison between parents and guardians and the TVDSB.

Gonzalez notes that because her children are older, the decision won’t affect her too much, but says that’s not the case for everyone.

“Some parents will have to go back to their offices and child care is going to be a challenge for many,” Gonzalez said, speaking to the concerns she’s heard.

Gonzalez says she’s also heard from parents who are relieved they won’t have to switch from their current routine surrounding remote learning.

“I have heard from some kids who were keen and eager to go back as soon as possible, (but) this late in the school year, it was really difficult for them to wrap their heads around the possibility of going back for just a few weeks,” Gonzalez said.

“I think we all wish that some of these strategies and decisions could’ve been made earlier.”

Gonzalez, along with Holloway and Taylor, added that she was in support of Ford’s suggestion to hold outdoor graduation ceremonies for students in all grades this summer.

Vince Romeo, the incoming director of education for LDCSB, says the school board is awaiting further information from the province regarding outdoor graduations, adding that no notice was given prior to Wednesday’s announcement.

“Obviously the size of some of our schools could pose a problem, there’s a whole organizational and operational component to that,” Romeo said, adding that LDCSB had planned to hold virtual graduations this year.

“We will await further direction from the (Ministry of Education) before making any final decisions on that.”

TVDSB was unavailable for comment on Wednesday, but noted in a media release following Ford’s announcement that “there will be important information to communicate with families in the coming days about retrieving personal belongings from schools, returning school board property, and year-end recognitions.”

The public school board said it planned to provide further information once it becomes available.