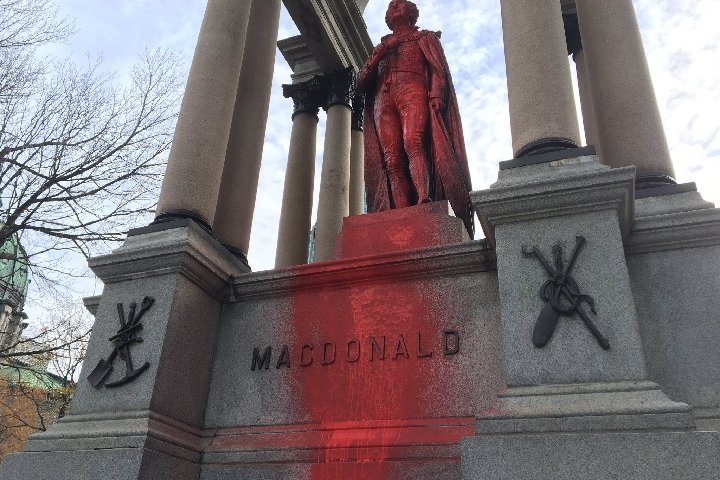 Warning: Some of the details in this story may be disturbing to some readers. Discretion is advised.

As Canadian government officials spoke this week about the bodies of 215 children found in unmarked graves at a former B.C. residential school site, the building they were sitting in bore the name of one of the men responsible for that system.

The pain and horror of the discovery spread like wildfire across the country. It also reignited a debate: what should Canada do about the statues that revere the very men who started the schools where these children died?

“The irony of the announcement and the type of messaging, and then the name of the building, is not lost on a lot of people,” said Sheila North, the former Grand Chief of Manitoba Keewatinowi Okimakanak (MKO).

It’s not the first time Canada has faced this type of outcry and reckoning.

Last summer, protesters in Montreal forcibly pulled down and beheaded a statue of Macdonald. In Charlottetown, P.E.I., a statue of Macdonald had regularly been splattered with red paint over the last year, before ultimately being taken down for good on Wednesday night.

But as in other regions with dark legacies, such as Germany and the Confederate South in the United States, every day that these symbols remain standing, so too looms the decision of what to do about them.

“You would never, not once, not ever expect a person who had been abused to go into a building named after their abuser, to have a statue or a likeness of that abuser being held up in reverence … it’s an insult and it’s traumatizing.”

Following the holocaust in Germany, no statues were erected in memory of the Nazi forces. Instead, Germany is full of reminders of the crimes those forces committed. Even the grounds where Hitler worked his Nazi supporters into an antisemitic frenzy have been left to disintegrate – with signs featuring “enter at your own risk,” according to one article.

“There are no statues or buildings that celebrate the policies of Nazi Germany, but yet, oddly enough, Nazi Germany is still thought about and still remembered. It’s still talked about,” said Sinclair.

Instead, the statues are a painful reminder of the trauma Indigenous families face.

North said she felt that pain acutely when she translated Stephen Harper’s 2009 apology for residential schools into Cree.

“When it said ‘to kill the Indian in the child,’ I can’t even describe the feeling that I got. It felt like I was leaving my body, and it felt like I was transcending into something or someplace that was really unfamiliar to me,” she said.

“I was trying to conceptualize what I would say to my grandparents. They’ve passed away, but what (would) I say to them to try to explain what this part of the speech meant. And so I literally had to think about kids dying and being killed … and it broke my heart into a million pieces.”

This is the feeling evoked in many when they walk past a statue that glorifies an architect of genocide or drive down a street named after men responsible for so many Indigenous deaths, according to North.

Proponents of keeping the statues up and names of schools in place say it’s about preserving history, and that to remove them would be equivalent to erasing that history.

Alberta Premier Jason Kenney is one of those proponents.

“We can all join together in the condemnation of the great moral evil of the Indian residential school system,” Kenney said, speaking during question period on Wednesday.

“At the same time, I don’t think that recognizing that evil requires that we remove from our history many of the central figures of Canadian history.”

But that stance is not reflective of how history actually works, according to Sinclair.

Macdonald oversaw the completion of the Pacific Railway that connected the country from coast to coast. He also secured the incorporation of several provinces, including British Columbia and Manitoba, and is widely remembered as Canada’s first prime minister.

He also had a proclivity for using racial slurs to refer to Indigenous people, and was a key architect of residential schools — a program which many experts refer to as constituting a cultural genocide.

Examples of Macdonald’s storied legacy won’t cease to exist if his statue comes down, Sinclair said.

“There would still be a train line right beside my house. We would still live in the legacy of residential schools, where … Indigenous peoples, many of whom went to those schools, are still sleeping outside in tents in downtown Winnipeg,” Sinclair said.

Calls for statues to come down grow

As these calls for change mount, the government has been pressed on what it plans to do about these statues and street and building names.

But it’s important “Indigenous voices are heard and at the forefront” of the debate, Miller said, and that the government respects those views.

Read more: What survivors said about life at the Kamloops Indian Residential School

Some have called for the statues to be placed in a museum. Others say they should be kept in place, but with a plaque providing context about what this person did. Some want the statues destroyed altogether – and some want them left untouched.

“It’s not good enough to have a plaque beside the picture of a person who perpetrated harm and say ‘this person perpetrated harm,’” he said. “You still hold him up in reverence with the statue.”

North suggested the statues be placed somewhere where they can provide education, as opposed to being kept in places of prominence.

“I think it is useful to save them somewhere, to put them somewhere that we can all remember and learn, because the last act of genocide is denial,” she said.

But things like names of streets and institutions should be changed for good, North added.

“If sports teams can do it, surely to goodness universities and cities can do it,” she said.

As governments at all levels go back and forth over what to do, some residents are taking the call to action into their own hands.

Students at Ryerson University, which was also named after an architect of Canada’s residential school system, have decided to stop using the name regardless of its official title. Online and in-person alike, many students and staff have begun to refer to the school as X University.

There is evidence that such bursts of community action can force governments’ hands.

In Bristol, U.K., a statue commemorating a slave trader was toppled by anti-racism protesters last year. The statue was chucked into the harbour, and when the local officials fished it out, they put it in a museum rather than in back in a public place.

In the Confederate South, plantation site tours now often mention the slavery that created the wealth that allowed the owners to build their residences. Public figures often face community backlash for things like attending antebellum parties or displaying confederate flags.

In Canada, the days are numbered on the statue debate, according to Sinclair.

“It’s not a matter of if, but a matter of when justice will occur. But when you feel the winds of justice coming, those who have benefited the most by injustice will be the loudest, will cry foul, will promise to never go away,” he said.

The Indian Residential Schools Crisis Line (1-866-925-4419) is available 24 hours a day for anyone experiencing pain or distress as a result of their residential school experience.