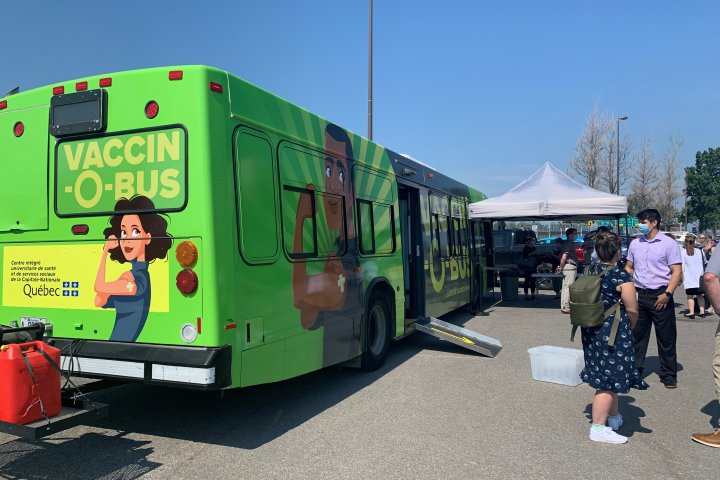 Claudine Uwara was the first person to be vaccinated in a new mobile clinic, the Vaccin-O-Bus. The refurbished city bus was parked outside the adult education centre she attends.

That’s the idea. The Vaccin-O-Bus will be driving around the Quebec City region, including in parks and at beaches. It has the capacity to vaccinate up to 130 people a day.

The idea is to entice parts of the population who are less likely to make an appointment for a COVID-19 vaccine. The deputy premier said these are young people and people from culturally diverse communities.

“This is the kind of initiative we take to join people who might not speak English or French and also maybe people who are a little less inclined to take an appointment or go by themselves to get their vaccines,” said Deputy Premier Geneviève Guilbault.

Nearby, an exhibition centre has been turned into a mass vaccination site for 12- to 17-year-olds — with a theme. The teens are treated like celebrities, arriving on a red carpet.

Monday was the first day for high school students to get vaccinated.

“I want a summer. I want to spend time with my friends. I want to have fun with them,” said Marie-Frédérique Cléroult, a secondary 5 student.

While about 1,000 teens received their first dose with five-star treatment in Quebec City, things didn’t run so smoothly at the Bill Durnan Arena in Montreal. There, almost 200 people waited in the hot sun and some still did not receive their vaccine.

“I was told specifically at one o’clock yesterday (Sunday) there were no more coupons available and I should come back at one o’clock today. I did so in this 93-degree heat explaining my situation that I have asthma, varicose veins and I was told the protocol had changed between yesterday and today,” said 66-year-old Marvin Rosenblatt.

Rosenblatt is not the only one confused about Quebec’s system to receive the second dose. Global News reached out to the regional health authority, but no one responded before deadline.