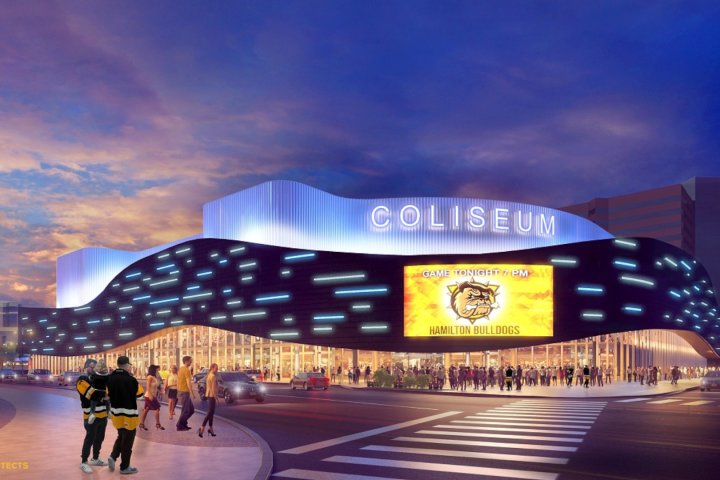 A private consortium is getting the go-ahead to redevelop a series of downtown Hamilton entertainment venues after coming to a multi-year, multi-million dollar agreement with the city on Wednesday.

Hamilton’s city council gave formal approval for a partnership with the Hamilton Urban Precinct Entertainment Group (HUPEG) which is set to spend more than $500 million on a mixed-use development, including an affordable housing project and a $50-million restoration of First Ontario Centre.

The group was selected in July 2020 as the preferred redeveloper of FirstOntario Centre, the Hamilton Convention Centre and FirstOntario Concert Hall.

Under the new agreement, the groups will also take on operation and maintenance of the three settings for at least 30 years with options to continue to the 49-year mark with no monetary contribution from the city.

Initially, the plan called for total investments of more than $400 million within the city core which also included a development with the Art Gallery of Hamilton.

The new deal calls for at least $12.5 million in capital upgrades, expansion and aesthetic enhancements to the convention centre and concert hall, with a $2-million contribution to the gallery.

The arena development includes a new exterior façade and video board, comprehensive transformation of the lower bowl, expanded concourse level and a new flexible curtaining system for the upper bowl balcony.

The project will include retail and office space in addition to new residential units allocating five per cent affordable housing – in keeping with current municipal bylaws HUPEG will be required to meet.

Ray Kessler, manager of real estate for Hamilton, says the overall deal is an “economic” exchange of the three properties in which a series of liabilities will be taken on by HUPEG.

“That’s where they (the city) will get their return, of course … in the future development or redevelopment of the properties,” said Kessler.

“The city in exchange gets properties that don’t have any financial implications to the city … we’re hoping for 49 years at minimum.”

A 2019 study by Ernst and Young estimated that privatizing the operation and maintenance of the entertainment venues would save Hamilton taxpayers $155 million per year.

One example would be the York Boulevard parkade which Ryan McHugh, manager of tourism and events with the city, said had a “sizeable” backlog in capital needs.

“So by transacting that site, the city would actually be saving additional money on that front,” McHugh said.

An artist rendering of a new concourse at First Ontario Centre in Hamilton. City Council has approved a 49-year agreement with an entertainment group to create an entertainment hub in the downtown core.Mayor Fred Eisenberger said parking sites were “not a massive revenue picture on a per-site basis” and the new developments would generate additional tax dollars down the road.

“Council supported this because it had a revenue-positive scenario for the city of Hamilton or at least avoided cost-revenue scenario, as well as additional development opportunities that would generate more revenue into the future,” Eisenberger said.

The other bidder in the development was the Vrancor Group — which proposed a $200-million modernization of FirstOntario Centre and the Hamilton Convention Centre completed in just 12 to 14 months.

Mayor Fred Eisenberger said the execs with that group were supportive of the HUPEG plan despite losing out.

“It was determined that the HUPEG proposal was was better overall for taxpayers and for the facility upgrades,” Eisenberger said.

“They’re very comfortable with that, and they look forward to future developments there as they’re doing now in the city of Hamilton, in the downtown core precinct.”