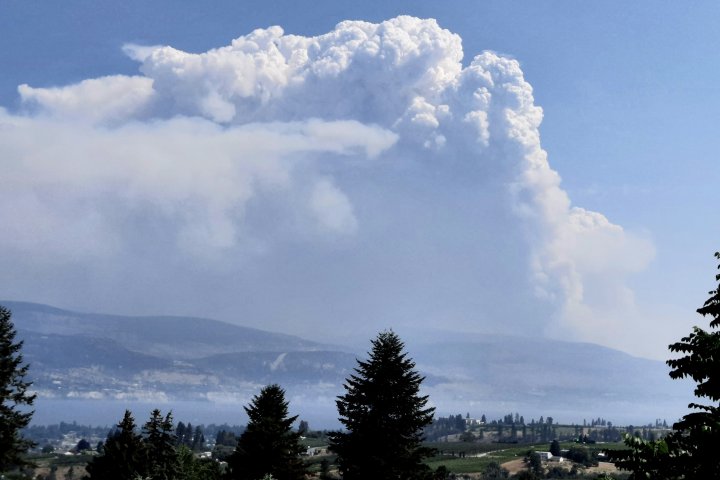 Helicopters and ground crews worked the Thomas Creek Wildfire on Wednesday as smoke billowed up from the 1,500 hectare blaze burning east of Okanagan Falls.

The 30 personnel on the ground concentrated on the area of the fire closest to homes, on the fire’s west and southwest flanks.

“They are being assisted by heavy equipment to establish and reinforce fires guards as well as utilize planned ignitions between the fire guard and the fire perimeter to help eliminate available fuels,” said fire information officer Aydan Coray.

On Wednesday, the blaze was estimated to be 1,500 hectares up from 1,100 hectares on Tuesday.

The growth mostly came from the fire burning east away from populated areas.

“This growth can be attributed to the mainly hot and dry conditions in the area as well as the wind in the area through yesterday,” Coray said.

Read more: District of 100 Mile House under evacuation alert due to wildfires raging in the Cariboo

Residents of more than 700 properties remain on evacuation alert on Wednesday, meaning they should be ready to leave on short notice.

Resident Roger Love was among those closely watching as helicopters buzzed overhead bucketing water on the blaze.

“It’s just ongoing. Being a local resident there is never enough [resources] but, I mean, there is fires burning all across British Columbia…I truly believe they are doing their best,” Love said.

Coray said the BC Wildfire Service has almost all of its resources on standby or being utilized.

“At this time, especially with all the new fire starts, we are prioritizing our resources as necessary to have an efficient response to fires,” Coray said.

Near the Thomas Creek fire, some already feel the worst is likely behind them.

Rancher Brian Thomas said the blaze started on Crown land next to his ranch Sunday afternoon.

Thomas said he had a piece of heavy equipment on site and started building fire guards.

“Forestry showed up and the OK Falls volunteer fire department showed up…we got it so it wasn’t headed towards the barns and everything and then it just went up the hill and just carried on,” said Thomas.

“That was a very close call because the wind was blowing.”

Days later, with the fire front further away, Thomas said he now feels pretty safe despite the ongoing alert.

Residents are hoping winds will remain favourable and continue to blow the blaze away from their homes.

On Wednesday afternoon, the regional district said no properties are imminently threatened.

Officials have also implemented an area restriction for the area around the Thomas Creek Wildfire in the interest of public safety while fire suppression activities continue.

Anyone entering the area for an unauthorized purpose could be subject to an $1,150 fine.