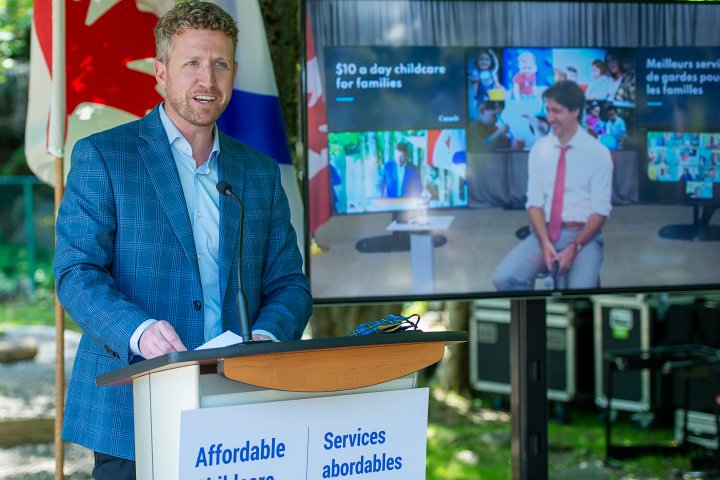 The Nova Scotia Liberals kicked off their campaign Saturday to win a third mandate and it was a campaign launch fuelled in large part with lots of cash from the party’s federal cousins in Ottawa.

In the week leading up to Saturday’s writ drop, the Trudeau Liberals played what amounted to a starring role to help Nova Scotia Liberal Leader — and incumbent premier — Iain Rankin get off to the best start he could.

Read more: The writ has finally dropped: N.S. to go to the polls Aug. 17

The big boost came on Tuesday when Prime Minister Justin Trudeau and Premier Rankin held a joint press conference. Trudeau dialled in virtually from Ottawa but he did dispatch Toronto-based Social Development Minister Ahmed Hussen to be on the ground in Halifax.

They announced that Nova Scotia had become the second province to sign a federal-provincial child-care deal which, all leaders promised, will result in $10-a-day child-care in the province by 2026. The Ottawa Liberals will kick in $605 million to make that happen while the Nova Scotia Liberals ponied up $40 million.

And, sure enough, on Saturday night that child-care deal was one of the first things Rankin mentioned at the end-of-day political rally held in his own riding of Timberlea-Prospect. It seems reasonable to assume that Rankin will remind Nova Scotia as often as he can that he was the premier who brought that deal home.

Consider the following announcements of federal cash bound for the Bluenose province that were made on Friday alone — the day before the writ drop:

And, again, all of the above was announced the day before the writ drop.

I asked both Trudeau and Rankin last Tuesday if either of them had discussed the timing of the Nova Scotia election and both said they had not.

I also asked Trudeau if he planned to join Rankin on the stump and campaign for the Nova Scotia Liberals. Both men chuckled and avoided the question. But the answer seems pretty clear: With the federal chequebook, the Trudeau Liberals were campaigning for Rankin right up until the drop of the writ.

David Akin is the chief political correspondent for Global News.