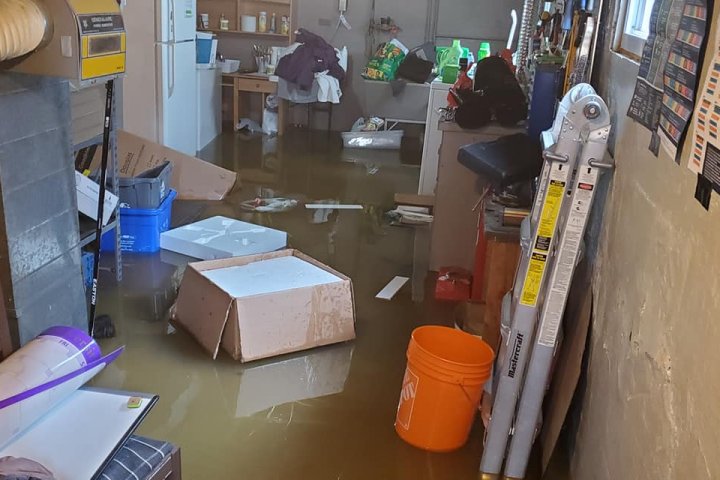 A woman is expressing frustration with the City of Welland after her basement became flooded following a day of heavy rain.

Alanah Claus says water began rising out of the floor drain of her Beatrice Street home at around 1 p.m. Saturday afternoon.

But when she called the city’s sewer backup line about an hour later, Claus says no one at the city gave her a clear answer as to the cause of the flooding or a response plan.

“It was pretty frustrating,” said Claus. “When I called the city, I was trying to explain that I thought it was the whole street that was impacted and I just got cut off and was told that a lot of people are dealing with water right now… and the lady could not get me off the phone fast enough.”

As the floodwater reached about five inches high, Claus says family friends came to the rescue with two water pumps to empty the basement, which as of Saturday evening, had not completely dried out.

“Luckily, ours isn’t a fully finished basement so it could have been a lot worse, but I can imagine a lot of people lost a lot of valuable things,” said Claus, who has been living in her home for about a year-and-a-half.

“This is going to be our whole next few days, just drying stuff out and assessing the damage.”

Claus says a number of her neighbours, even those one street over, were dealing with flooded basements but she has not seen an official response from city officials.

“Several hours, all the way to the end of our street, and at least another block up from us were all having the same issue,” said Claus.

Despite having an unfinished basement, Claus says they had “a lot of stuff down there,” including tools, exercise machines, supplies from her job as a teacher, and a chest freezer that was floating around at one point.

As of Saturday evening, the City of Welland had not issued any details of the flooding on its official Twitter or Facebook accounts.

The city has not responded to a request for comment.