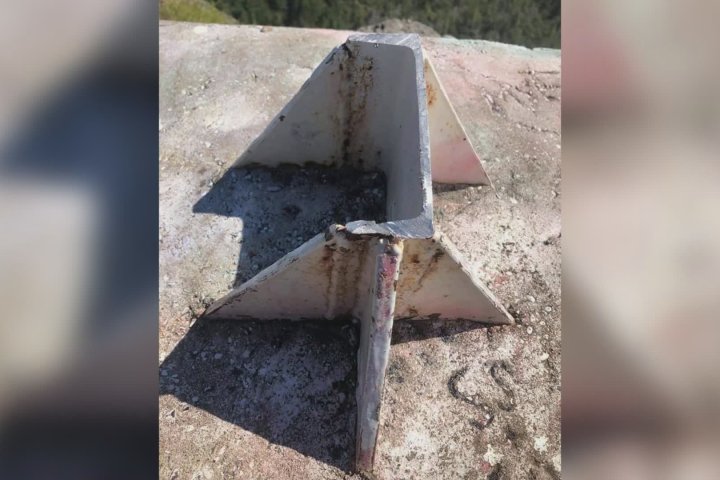 The large metal cross atop Mount Tzouhalem in the Cowichan Valley has been removed.

The cross was taken down sometime overnight between Friday and Saturday.

“The vandalism was clearly done with a grinder,” Siebring said. “This was a metal cross and it was cut off at the base and you can clearly see in the pictures that there are grinder marks, which is concerning given the fire hazards and everything else up there.”

There have been a number of instances of vandalism involving churches and statues of Canadian leaders following the discovery of unmarked graves at the sites of former residential schools. There is no confirmation that the vandalism is related to the discoveries and no one has claimed responsibility.

Read more: Suspect sought in previous arson attempt at Surrey, B.C. church that has burned down

The cross has been a fixture in the Cowichan Valley since the 1980s, not just for those with religious ties, but also for hikers and mountain bikers who frequent the area.

“The original one was wood,” Jack Hutton of Providence Farms said. “So then they replaced it with a metal cross and then that got vandalized.”

The question now is what, if anything, should replace the metal cross?

“We are at a bit of a crossroads here with this particular symbol in terms of the events around us,” said James McKay, who runs a website dedicated to Mt. Tzouhalem. “So, perhaps it’s time as a community we take pause and have a look at what kind of symbol would we like up there.”

Discussions on how to move forward are expected to take place in the coming weeks. Cowichan tribes and local First Nations will be involved in the decision-making process.

North Cowichan-Duncan RCMP say they are aware of the incident.