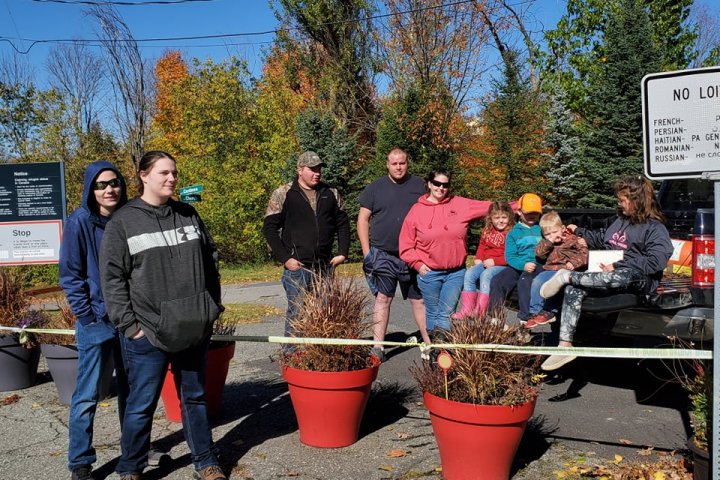 The reopening of Canada’s borders to fully vaccinated Americans next month is welcome news for many of Quebec’s neighbours to the south.

For some Vermonters living near the border, it’s about much more than just getting to sightsee in Quebec again.

“I haven’t actually physically been able to put my arms around my kids in almost two years,” said Maria Provoncha, who lives in Derby, Vt.

Derby is about a 10-minute drive from Stanstead, Que. When Canada announced it would be allowing fully vaccinated Americans in as of Aug. 9, she was ecstatic.

Other than a few meetings right at the border, she hasn’t seen her two sons and four grandchildren who live in the Eastern Townships since early 2020.

“I have one grandson that’s only three years old. So it’s going to be like meeting a stranger,” she said. “He hasn’t really seen me as he’s grown to get that connection.”

Tammy Bishop lives in Newport, Vt., and says she has a lot of family in both Quebec and Ontario.

Her elderly mother passed away in Stanstead during the border closure, and she couldn’t be there.

“It was a difficult time for all of us,” Bishop said. “We’re just in the process now of making arrangements for her services, because there’s a little more freedom for my sister and nieces and nephews to come from Ontario and myself to be able to cross the border.”

Dan Brogan also lives in Newport. He’s dating a teacher from the Eastern Townships he met online about six months ago.

“It felt like a long-distance relationship, even though it’s a very short distance apart,” Brogan said.

Read more: A COVID-19 love story: Meet a Canadian bride and her U.S. husband who got married at the border

They’ve also seen each other at the border, but will now be able to spend quality time together for the first time.

“Just to be able to explore the Townships and finally spend some nice company with each other, like not through a screen, and actually be able to see each other in person will be very nice,” he said.

None of the Vermonters we spoke to are concerned about the need to get tested before coming to Canada, but they are all upset that the U.S. is not yet opening its land border to vaccinated Canadians.

“It’s really surprising and disappointing,” Brogan said. “It honestly feels in bad faith in relation to our strongest ally.”

Isobel Marks, a U.S. permanent resident and a Canadian citizen who has lived in Vermont for about 20 years, said she hopes the U.S. opens its land border to Canadians soon, as Vermont is craving the usual flow of tourists.

“It’s had a serious impact on our restaurants. I mean, I live in a small community right near Newport, and it’s had a very serious impact,” she said.

The U.S. faces pressure to open from within.

“It’s time for the United States to align its border policy with science, facts and data,” said New York Congressman Brian Higgins on the floor of the U.S. House of Representatives on Tuesday, urging the Biden Administration to open the border.

The Biden administration is not facing pressure from Prime Minister Justin Trudeau, however.

“Every country makes its own decisions about what it does at its borders,” Trudeau said at a press conference in Ontario on Tuesday.

For now, Vermonters are happy to at least have another milestone to celebrate on the path toward normal.