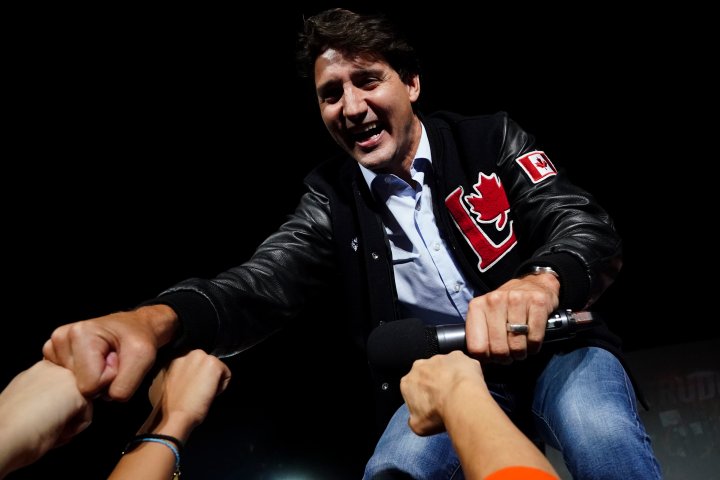 As so often happens in a Canadian federal election, the outcome may depend on the choices of the 3.6 million people who live in the “905.”

Voters in the 30-odd seats in Durham, York, Peel and Halton regions  — the horseshoe-shaped region that borders Toronto and which has been given the nickname the “905” for the area code many there have —  have mostly picked Liberals in the last two elections and, sure enough, Liberals have formed the government in Ottawa. But when those same voters start electing Conservatives, then Conservatives can usually count on claiming the government benches.

If it’s possible to talk of a bellwether region, then surely the “905” must be it.

Polling firm Ipsos was tracking the vote intentions of “905” voters through the month of August and, in a poll provided exclusively to Global News, found that voters in that region were certainly prepared to consider looking at Erin O’Toole’s Conservatives but that the Justin Trudeau Liberals held the advantage — at least as it stood as the calendar flipped to September.

In a survey of 2,001 residents in the 905 completed over three different polling periods in August, Ipsos found 37 per cent were ready to vote Liberal and 34 per cent would vote Conservative. Jagmeet Singh’s NDP was the pick of 23 per cent, Annamie Paul’s Green Party had two per cent support and Maxime Bernier’s People’s Party of Canada had just one per cent support among voters in the 905.

The Ipsos poll of “905” residents was done Aug. 13-16, Aug. 20-23, and Aug. 27-30. Ipsos surveyed 1,501 people online and another 500 were interviewed by real people calling landlines and cellphone numbers. The pollster uses a statistical technique called a “credibility interval” to measure the precision of its results and claims an accuracy rate, for this sample size and technique, of 2.9 percentage points 19 times out of 20.

One key takeaway from the Ipsos deep dive in the 905 is that Trudeau is slightly more popular in the region than he is in national polls while O’Toole was less popular. That would be a net positive for the Liberals.

And yet, another key takeaway from the 905 survey:  just 41 per cent of those polled said the Trudeau government deserved re-election while 59 per cent said it was time for another party to take over. That would be a net negative for the Liberals.

In any event, the poll also underlines the willingness of voters in this region to move their votes and that, along with the sheer size of the region, gives the 905 its status as kingmaker.

Pollsters, pundits, and parties will argue about the precise definition of the non-Toronto part of the Greater Toronto Area that we dub the 905. There is now broad consensus that the riding of Milton should most definitely take its place among the GTA ridings — and be its western terminus — but there was a time, perhaps as recently as 20 years ago, when Milton’s small-city, rural character made it distinct from ridings in Mississauga, Brampton, Pickering and so on.

Meanwhile, the eastern terminus of the Greater Toronto Area is the riding of Durham. Indeed, that’s why Erin O’Toole — who represents the riding of Durham — was exhorting his supporters during stops in Whitby and Mississauga last week to make him the first prime minister in our history to represent a GTA riding. It’s northern boundary is generally considered to be Brampton, Vaughan, and Newmarket but some, like me, might quibble and suggest that Dufferin-Caledon, just north of Brampton, ought to be considered a GTA/905 riding as most of those who live in its heavily populated southern part would work and/or shop in Brampton or Mississauga.

In any event, while on those campaign stops in the 905 last week, O’Toole also stressed his affinity with voters there. If Justin Trudeau could proclaim, as he did during the French language leaders debates, that he was a “proud Quebecer,” then O’Toole would boast of his roots as a Bowmanville boy who became a GO Train commuter.

“I’m a product of the 905. Because like my parents, I chose to then raise my family in the Toronto suburbs too,” O’Toole said Saturday at a campaign stop at the Whitby GO station.

Read more: The close calls: Here are the ridings that could have a photo finish on election night

And make no mistake: In the 905-fight the choice is a binary one — red or blue, Trudeau or O’Toole, Liberal or Conservative. The NDP, Greens or any other party have only ever played minor roles in electoral politics in this region. Indeed, in the last 60 years, just one MP that was not a Conservative or Liberal won in this region and his name was Ed Broadbent, New Democrat from Oshawa from 1968 until the 1993 election.

That trend will almost certainly continue in 2021. The Liberals currently hold all but five seats in the 905 and if O’Toole has any hope of becoming the first GTA prime minister, his party absolutely must make gains here.

Here then are a couple of ridings in the 905 races to watch Monday night:

David Akin is the chief political correspondent for Global News.