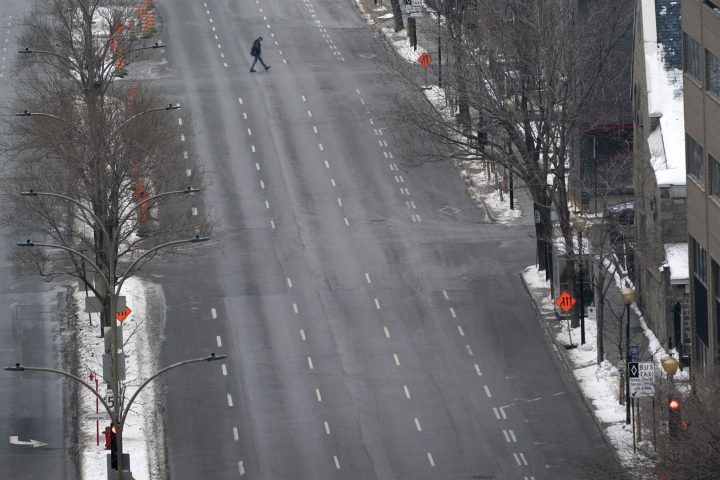 A majority of Canadians say they’re still in support of another lockdown to stop the spread of the Omicron COVID-19 variant, a new poll has found.

But despite more than 55 per cent of Canadians showing such support for renewed public health measures, the poll’s results — done by Ipsos exclusively for Global News — also show that the same support is dwindling.

Previous polling done by Ipsos showed that in July of 2021, nearly seven out of 10 Canadians said they would support more lockdown measures amid a fourth wave of the pandemic, which dropped to 63 per cent in September and now sits at just 56 per cent as an Omicron-driven wave begins to rise across the country.

Darrell Bricker, Ipsos’ CEO of public affairs, says that the dwindling number may be reflective of Canadians feeling not only frustrated over the repeated lockdowns, but also questioning if this is the right thing to be doing given the high vaccination rates Canada has.

Bricker says he’s noticed two things changing in public opinion that could also point to the lessening support they are now showing for lockdowns — people are less “overwhelmingly concerned” about COVID-19 than they previously were and that there’s more space opening up for the government to tackle other issues and concerns.

“We’re certainly seeing that in our polling, but also given the fact that we’ve had such an increase in vaccinations, I’m wondering if people think that they’re more protected maybe than they might actually be,” he said.

The new polling comes as public health units across the country brace for what looks to be a fifth wave of COVID-19, driven by the spread of the highly-transmissible Omicron variant.

Since first being identified in South Africa, Omicron has spread to over 77 countries, including Canada, according to the WHO.

The health agency said that the variant poses a “very high” risk to derailing the world’s fight against the COVID-19 pandemic, and that it was likely to be found in more countries

While preliminary data points to the variant — riddled with dozens of mutations — being much more transmissible, it also suggests that it isn’t any more deadly than the dominant strains of COVID-19, like the Delta variant.

Early data also suggests that the variant does not seem to affect the efficacy of the COVID-19 vaccines, and that the shots still provide protection against severe outcomes like death and hospitalization.

Read more: Omicron is raging in the U.K. What can Canada learn?

That transmissibility, though, has researchers concerned worldwide, as well as in Canada, where public health officials projected that Omicron — should it replace Delta — could be the dominant strain in the country and that daily infections could skyrocket to over 26,000 a day by mid-January.

However, Bricker says that should cases of the variant rise, Canadians’ opinions on the lockdowns may rise over time.

“So I think over the space of the next couple of weeks, because this thing seems to be moving pretty quickly, we’ll either see that number stabilize at this level or if it goes anywhere, it’ll probably go up,” he said.

“It’s something we’re going to have to watch over time.”

The poll’s results also differ from region to region, with support for lockdowns highest in Quebec and British Columbia, and lowest in Ontario and Alberta.

Furthermore, the poll also found that Canadians believe that Omicron would ultimately delay the country’s return to normal, with over 80 per cent of Canadians agreeing.

When it came to travel, eight out 10 said they would cancel their travel plans should COVID-19 get any worse, though over 35 per cent said they were set on travelling next year despite fluctuating case counts.

“It shows that people do realize that there’s an effect that’s coming into Canada as a result of Omicron, that we’re into a new phase of whatever we’re dealing with, and as a result, they should be adjusting their behaviour accordingly,” said Bricker.

Read more: Omicron FAQ: Everything you need to know about the COVID-19 variant

Bricker says that he’s seeing a situation now in which

“So maybe what we’re seeing here is a situation in which people are saying, ‘Maybe I’m not as supportive of lockdowns as I used to be,’ but maybe travelling — that’s still out of bounds.”

Canada’s Chief Public Health Officer Dr. Theresa Tam’s approval rating when it came to handling the pandemic stood at 64 per cent, while Prime Minister Justin Trudeau’s sat at 49 per cent in comparison. Canadian premiers had also averaged at around 57 per cent approval for their handling of the situation.

Bricker says that we’re seeing an evolution in polling as more Canadians develop a nuanced view of the pandemic and public health restrictions, and that we should be preparing for a more diverse opinions as the pandemic progresses.

“We’re learning to, to a certain extent, live with it there,” he said.

“Their decisions are more complicated. It’s not just a light switch flipping on or off, it’s more like a dimmer,” Bricker added. “It kind of goes up or down based on the circumstances or based on based on the particular things that are happening in communities.”

Exclusive Global News Ipsos polls are protected by copyright. The information and/or data may only be rebroadcast or republished with full and proper credit and attribution to “Global News Ipsos.” This poll was conducted between Dec. 10 and 15, 2021, with a sample of 1,001 Canadians aged 18-plus interviewed online. The precision of Ipsos online polls is measured using a credibility interval. This poll is accurate to within ± 3.5 percentage points, 19 times out of 20, had all Canadians aged 18-plus been polled.

Red Sox hang on for 6-5 win over Blue Jays

Ferdinand Marcos Jr to be sworn in as Philippines president