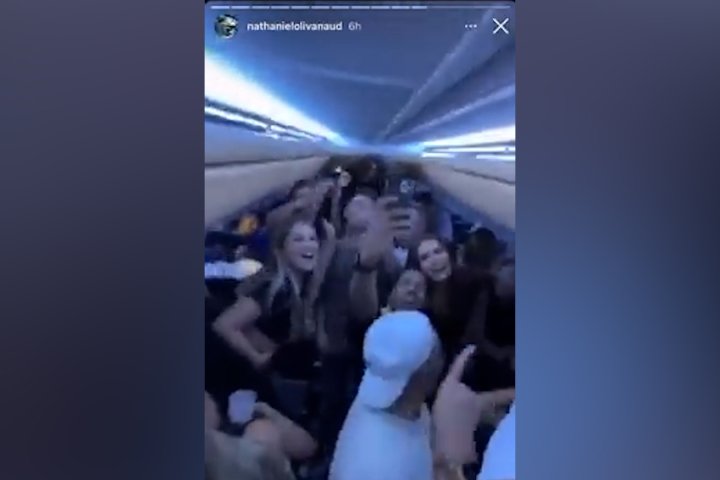 The organizer of a Sunwing flight to Mexico that saw reality TV stars and influencers vape, sing and dance on board says the group’s return flight was cancelled based on “presumptions.”

James William Awad, who operates 111 Private Club, made the comment in a statement he released on his personal blog on Thursday. He said that Sunwing agreed to offer his group a return flight — only to backtrack when they couldn’t agree on the flight’s terms.

Air Canada and Air Transat have both said they would not allow the group to fly home using their airlines, either.

“They cancelled our flight based on presumptions, and thus other companies followed their steps,” said Awad.

“At this time, the 111 Private Club is working tirelessly to get everyone back home safely as quickly as we can … This was my first travel event. I have significantly learned, and I am still learning from this experience. Learning from them is what makes the difference.”

Videos of the Dec. 30 flight shared on social media show passengers not wearing masks as they use vapes, hold a large bottle of vodka, and sing and dance in the aisles and on seats.

Social media posts suggest some of the passengers were cast members from Quebec reality television shows, including the Quebec adaptation of the popular British dating series “Love Island.”

Airlines push back on Sunwing partiers

In a statement released on their Instagram story on Wednesday, Sunwing said that during “a recent private charter flight from Montreal to Cancun,” the behaviour of a group of passengers was “unruly,” prompting both the company and Transport Canada to launch an investigation.

“As a result of our ongoing investigation and the group’s refusal to accept all terms for the private charter to return to Montreal, we have made the decision to cancel the return flight,” Sunwing’s statement said.

“Sunwing’s decision was made to ensure the safety of all crew and passengers onboard the aircraft.”

Awad’s statement alleges that the sticking point was the fact that Sunwing would not provide his group with food during the flight back to Montreal.

“I agreed to every demand, including multiple In-Flight Guardians, I assured them every measure would be followed, but we couldn’t conclude an agreement because Sunwing refused to Provide Meals to the group for a 5h flight,” he wrote.

“As stated, to the extent that we can identify the passengers who were part of the group, we are denying boarding to ensure the safety of other passengers and our crews,” Air Canada’s media relations team wrote in a statement.

“15 people were denied boarding yesterday and four others this morning for this reason.”

Rebecca St-Pierre, a 19-year-old student and passenger on the Sunwing flight, is among those who remain stuck abroad. She told Global News she tested positive for COVID in Tulum and is currently self-isolating in Mexico.

She believes multiple other passengers were also infected. St-Pierre also told The Canadian Press that, before the return flight, some people allegedly put Vaseline in their noses to try to trick the COVID-19 tests.

St-Pierre told Global News she won her ticket for the trip in a contest and said it was her first time ever travelling on an airplane.

“It’s difficult for me to judge what we’re allowed and not allowed to do, it was hard because it was the first flight of my life,” St-Pierre said in French.

She said there was a “party” mood on the flight, but that not everyone participated to the same extent. She said there were even two girls next to her who were “trying to sleep.”

When the news of the flight began to spread and criticism poured in, she said most people weren’t worried at first. Since many were older than her and had experience being in the public eye, St-Pierre said she was reassured that the issue would blow over.

“I tried to tell myself that it must not be a big deal, these are people who are used to this kind of thing, who are used to, maybe, criticism, and so if they say ‘it’s not a big deal’ and that ‘it’ll pass’ and it’s just ‘good for popularity’ or whatever, that must be the case,” St-Pierre said, speaking in French.

But, St-Pierre said, as she reflected on the issue, she got scared. Now, she’s regretful. She told Global News she’s “sorry for everything.”

“I want to apologize to Mr. Legault and everyone, the government, because I know they’re working hard to put measures in place so we can finish COVID as soon as possible … and I know what’s being put in place is for our well-being.”

She added that she knows she doesn’t have “special permission to party.”

“My future actions will be better thought out,” St-Pierre said.

“To those who were planning to travel, I say very clearly, now is not the time to travel,” he said during a Dec. 15 press conference.

“The rapid spread of the Omicron variant on a global scale makes us fear the worst for Canadians that may think of travelling. Travelling Canadians could contract the virus, or get stranded abroad.”

On Thursday, Canada reported 39,433 new COVID cases and 69 deaths, but a number of provinces have restricted COVID-19 PCR testing as they drown in the demand — so the Public Health Agency of Canada (PHAC) has warned that daily case counts likely underestimate the true numbers.

As of Dec. 27, 1,830 COVID-19 patients were reported in Canadian hospitals, and 480 of them were in intensive care units, according to national data.

Speaking to reporters on Wednesday, Prime Minister Justin Trudeau slammed the actions of the group of revelers on the Sunwing flight.

“It’s a slap in the face to see people putting themselves, putting their fellow citizens, putting airline workers at risk by being completely irresponsible,” Trudeau said.

He added that the videos made him feel “extremely frustrated.”

“Like many people, I was disappointed to see the images of the Sunwing flight with influencers,” he said.

“At this stage in the pandemic, we shouldn’t see a flaunting of public health measures. Everyone has to follow the rules, particularly when they’re in a travelling situation that is their choice, that they could do safely if they followed the rules.”

In a joint statement Tuesday, the federal government said that if Transport Canada determines that non-compliance with regulations and requirements has occurred, fines of up to $5,000 per offence could be issued to passengers.

— With files from The Canadian Press