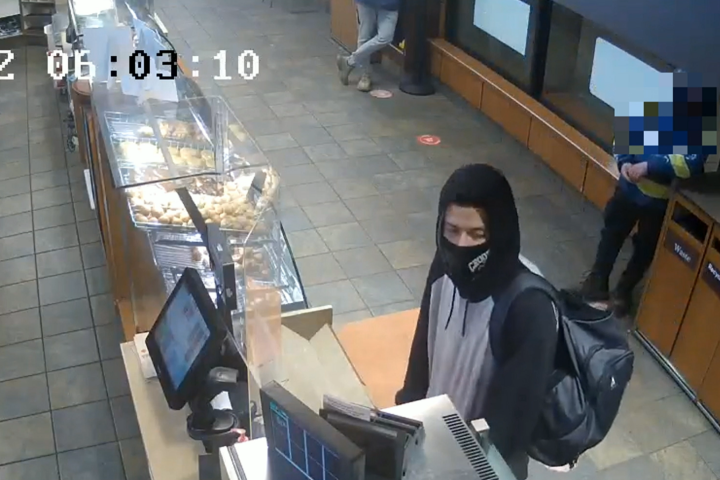 The stabbing took place around 6:20 a.m. on Saturday at the Harbour Centre Tim Horton’s near Seymour and West Hastings Street. The alarming encounter was captured in security footage, released by Vancouver police on Monday.

“This disturbing incident has all the hallmarks of a random attack that came completely without warning, and we’re increasingly worried about the public’s safety,” said Sgt. Steve Addison in a news release.

“We need anyone who witnessed this assault to come forward, and we urge anyone who recognizes the suspect to call police.”

Police said the victim, who is now expected to survive, was a newcomer to Canada.

He was waiting in line at the coffee shop when the suspect approached from behind and “repeatedly stabbed him” in the back and shoulder before fleeing the store, police said in the release.

The incident took place just three days after Vancouver police released security footage of another random attack — this one on a 22-year-old woman outside Hotel Georgia on New Year’s Eve.

Vancouver police data shows that on average, more than four people per day are the victims of unprovoked stranger assaults within VPD jurisdiction.

The suspect in Saturday’s attack is described as a man in his 20s about six feet two inches tall, with short black hair and a slim build. He was wearing a grey hoodie with a black hood and sleeves, grey and black stone-washed jeans, and black sneakers.

He also wore a black and white face mask with a Crooks and Castles logo, and had a black and grey backpack.