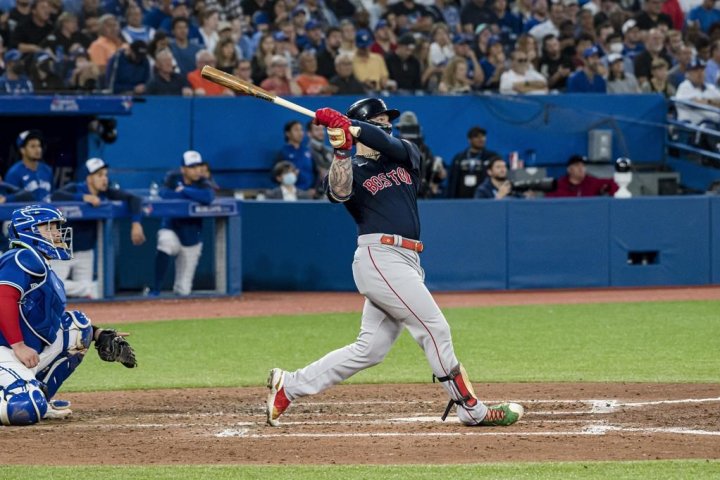 TORONTO – The Boston Red Sox scored three runs in the 10th inning and hung on for a 6-5 victory over the Toronto Blue Jays on Wednesday night to avoid a three-game sweep.

Alex Verdugo later tacked on a two-run double off Tim Mayza to help Boston (43-33) win for the eighth time in 10 games.

Matt Strahm (3-2) gave up two runs in the bottom of the 10th before getting George Springer on a flyout with runners in scoring position to complete the victory. Santiago Espinal and Cavan Biggio drove in a run apiece earlier in the frame.

Verdugo also homered and Franchy Cordero had four hits for the Red Sox, who moved a half-game up on third-place Toronto with the victory. Springer hit a solo shot for the Blue Jays (42-33).

After starting a rally with a pinch-hit single in a walkoff victory a night earlier, Toronto catcher Alejandro Kirk helped get the offence going again in the series finale.

He drew a leadoff walk from Boston starter Nick Pivetta in the second inning and moved to second on a Raimel Tapia single. Espinal drove in Kirk with the game’s opening run.

Blue Jays starter Alek Manoah retired the first six batters in order before giving up a bunt single to Cordero with the shift on in the third inning.

The Toronto ace threw his glove at the ball as it rolled up the third-base line but it didn’t make contact. If it had, Cordero could have been awarded three bases under Major League Baseball rules.

Cordero was soon on third base anyway. He stole second and took an extra bag on Kirk’s wild throw before scoring on a Rob Refsnyder sacrifice fly.

Tension rose in the bottom half of the frame after Pivetta hit Kirk in the left elbow with a pitch. Vladimir Guerrero Jr., had some words for the Victoria native from the dugout and led the charge as the benches and bullpens emptied.

The two squads mostly jawed with each other and Springer corralled Guerrero to help prevent things from escalating. Kirk stayed in the game and Toronto loaded the bases but Tapia struck out to end the threat.

Back-to-back singles and a sacrifice bunt put two Boston runners in scoring position in the fifth inning. Manoah responded by fanning Bradley and getting Refsnyder on a groundout to keep the game tied.

Springer put a charge into the announced crowd of 27,601 at Rogers Centre when he turned on an 0-1 fastball for his 15th homer of the season. His defensive skills were in form, too, as he made a nice diving catch in the sixth inning on a sinking liner from J.D. Martinez.

Xander Bogaerts singled later in the frame and scored on Verdugo’s sixth homer of the year.

Pivetta was pulled after issuing a leadoff walk to Biggio in the seventh inning. The Canadian was treated to a chorus of boos as he walked to the dugout.

The Red Sox had a runner on third base with one out in the ninth inning against Jordan Romano but he struck out pinch-hitter Bobby Dalbec and got Bradley on a flyout.

The probable pitchers for Toronto’s upcoming five-game series against Tampa Bay have yet to be formally unveiled but manager Charlie Montoyo said Yusei Kikuchi was tabbed for the opener Thursday night.

Jose Berrios will pitch Friday and Kevin Gausman will start Saturday, although it wasn’t determined whether he’d start Game 1 or 2 of the doubleheader.

Former Blue Jays catcher Russell Martin will be honoured during the pre-game ceremonies on Canada Day to recognize his impact on Canadian baseball.

The four-time all-star was born in Toronto and raised in Montreal. Martin played 1,693 big-league games over 14 seasons before retiring last month.

This report by The Canadian Press was first published June 29, 2022.

In My Homeland, the Smell of Death on a Summer Afternoon