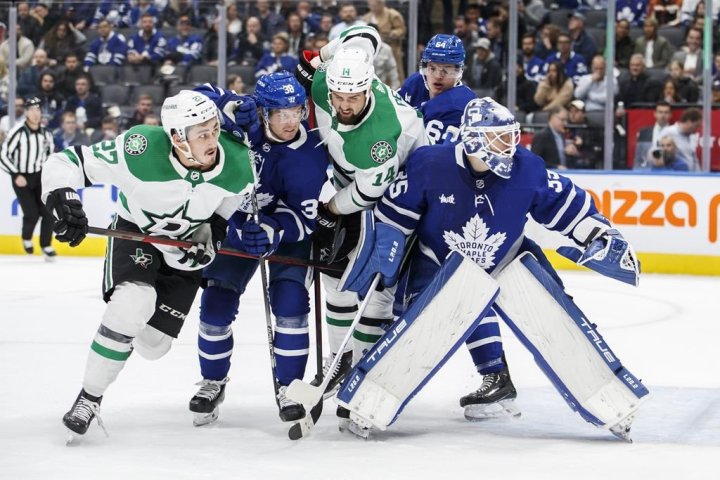 TORONTO – Nick Robertson scored his second goal of the night in his season debut at 3:46 of overtime as the Toronto Maple Leafs defeated the Dallas Stars 3-2 on Thursday.

The winger took a pass from Auston Matthews on a 3-on-1 rush and fired past Scott Wedgewood.

Tyler Seguin and Luke Glendening replied for Dallas (3-0-1), which got 40 saves from Wedgewood in his first action of the season.

The Leafs were coming off a dismal 4-2 loss to Arizona — the NHL’s 31st-ranked team in the standings last season — on Tuesday that saw head coach Sheldon Keefe deliver a strong public message afterwards for the second time in four games to start the schedule after also blasting Toronto on the heels of a 4-3 loss to Montreal — 32nd in the 2021-22 overall standings — on opening night.

The Stars, meanwhile, entered play having outscored their opponents 13-3 through their first three games, with a pair of victories over Nashville and another against Winnipeg.

Tied 1-1 through two periods, Toronto nudged in front 1:59 into the third period when Robertson made a nice play to shake Dallas captain Jamie Benn along the boards before eventually taking a feed from Bunting and beating Wedgewood.

Robertson nearly made it 3-1 a few minutes later, but fired wide on a 2-on-1 down low with Wedgewood at his mercy.

Dallas got back even at 7:21 on a power play when Seguin fired from in close for his second off a nice feed from former Leafs winger Mason Marchment after Kerfoot went to the box for delay of game.

The play was initially waved off for goaltender interference, but Stars head coach Pete DeBoer challenged the call. The sequence was eventually overturned after the NHL situation room determined Mitch Marner was responsible for the contact on Samsonov.

It marked the second time in as many games the Leafs have been on the wrong end of a review. Kerfoot had a potential tying goal negated late Monday against Arizona for a hand pass by Toronto defenceman Morgan Rielly that left Keefe annoyed in his post-game media availability.

Dallas opened the scoring at 14:45 of a tentative first when Glendening banged a rebound past Samsonov moments after Seguin fired wide on a breakaway.

Wedgewood, who got the call with Dallas giving Jake Oettinger the night off following his sparkling start to the campaign that includes a .966 save percentage, didn’t have a ton to do at the other end until Toronto broke through on the power play a few minutes after the restart with its second unit.

Rasmus Sandin’s initial shot from the point hit Bunting in front and caromed to Kerfoot for him to fire home at 2:31 of the middle period.

Toronto had a couple of other good chances later in the second, including a William Nylander dangle to set up Rielly, but the Stars netminder was there to deny the blue-liner.

Robertson suited up for the first time in 2022-23 after getting sent to the minors despite a strong training camp because of salary cap and waiver concerns.

The 21-year-old faced his brother and fellow winger Jason, 23, for the second time in his career Thursday.

Jason Robertson signed a four-year, US$31-million contract with the Stars earlier this month after sitting out most of camp as a restricted free agent.

METE ON THE MOVE

Leafs defenceman Victor Mete also suited up for the first time in 2022-23, entering the lineup for the injured Jake Muzzin (neck).

A native of nearby Woodbridge, Ont., Mete had the game’s first shot on a short-handed 2-on-1 in the first and made a couple of nice reads in the second to create scoring chances for his team.

Leafs: Open a five-game road trip Saturday in Winnipeg against the Jets.

This report by The Canadian Press was first published Oct. 20, 2022.