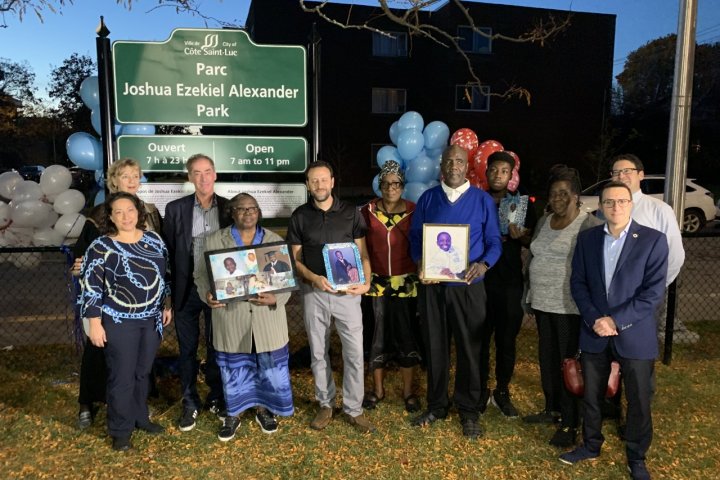 Jean-Drapeau, Jeanne-Mance, Louis-Hippolyte Lafontaine are all famous historical figures who have a park named after them to recognize their achievements.

And now Joshua Ezekiel Alexander has been added to the list.

He might not be as famous but for many residents of Emerald Avenue in Côte Saint-Luc, Alexander’s achievements are meaningful.

It’s why a park in the area now bears his name.

Alexander grew up on Emerald avenue and played often at the local park, whenever his health permitted.

“I’m very proud because Joshua deserves it, he’s been through a lot,” said his mother Victoria Wignal.

Alexander underwent a heart transplant when he was only one years old and suffered many health issues throughout his life, which limited his ability to live a normal life.

The park was a source of joy for Alexander.

“He had lots of friends who really took care of him around here,” Wingal said. “When he could play, the really knew to take care of him.”

Wingal said that throughout the years, Alexander showed incredible resilience and faced every struggle with bravery, surpassing every expectation.

Doctors even named him “miracle baby,” because he wasn’t supposed to live beyond the age of four.

That resilience didn’t go unnoticed by his community.

When the city was looking to rename the park after giving it an upgrade, residents banded together and brought his name forward.

Residents were asked to suggest an exceptional person of historical or cultural importance, or someone who has directly impacted the lives of Côte Saint-Luc residents for at least 15 years.

Wignal, a woman of deep faith, saw the city’s decision as an answer to her prayers.

“I always asked God, ‘I wish I had something to carry on Joshua’s name,’ and it happened… sometimes I said ‘oh I’m going to ask for a tree and I’m going to plant it’… but then God did more,” Wignal said.

On Tuesday, the park’s new name and plaque was unveiled in the presence of Alexander’s neighbours, family and Côte Saint-Luc city officials.

The city’s mayor, Mitchell Brownstein, says when he heard Alexander’s story, he was inspired and hopes others who play at the park will feel the same way, too.

“It sends a message that we have to enjoy every moment of life. It’s not about the length of life, but the journey, and the moment and how you spend those moments,” Brownstein said.

Alexander’s nephew, Tyrese Peters says the park will now always remind him on his late uncle.

“This park being named after him brings back his memory,” said Peters.

As for Wignal, she says she is sure her son will be looking down with joy and pride.

“Joshua would be proud and everybody would be welcomed. Joshua is going to be watching over the kids,” Wignal said.

Wingal added that she believes all the children who will play in the park from now on are playing for all of those whose lives were cut short, including her son’s.